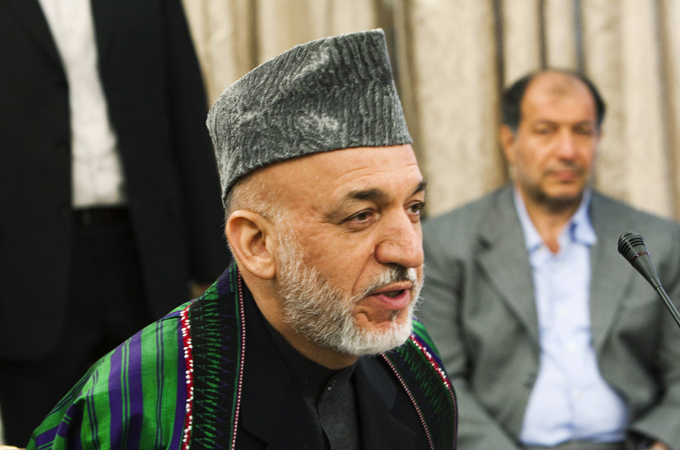 Karzai’s decree says the Independent Election Commission, not the courts, is the final authority on election results [Reuters]

Karzai established the tribunal to look into alleged abuses during last year’s parliamentary election. It issued its findings in June, calling for the removal of 62 members of the Wolesi Jirga, the lower house of parliament.

In his decree on Wednesday, Karzai said that the court could not change election results; he called the Independent Election Commission – which organised the vote – the final authority on the outcome. That ruling would seem to invalidate the court’s findings.

But Karzai also directed the commission to decide whether the tribunal’s verdict should be enforced.

“After this decree, all issues of the Wolesi Jirga elections processed in any other body, apart from the IEC, are considered ended,” Karzai said in the decree.

Siamak Herawi, a spokesman for Karzai, said the commission would “evaluate” the tribunal’s findings and decide if any members of parliament should be removed.

An anonymous official in Karzai’s office told AFP that the decree asked the IEC “to make a final decision based on the evidence, findings and verdicts of the special court.”

Analysts suggested the decree could be a “face-saving measure” for Karzai, who has been threatened with impeachment over the tribunal: The commission could reject most of the tribunal’s findings but dismiss the small number of MPs who are accused of criminal activity, not electoral fraud.

“It seems likely that those are the ones that the IEC is now implicitly being asked to remove, as opposed to the full 62 recommended by the courts,” said Candace Rondeaux, the International Crisis Group’s senior analyst in Kabul.

The IEC, though, has already said it does not recognise the court. Earlier this year, IEC members threatened to arrest tribunal employees who tried to collect ballot boxes for examination.

The tribunal is a main reason for the political gridlock which has paralysed Kabul in recent months. Many members of parliament called it unconstiutional, and threatened to quit in protest over its work.

The Wolesi Jirga tried to summon the attorney general to testify about the court earlier this summer. He refused to show up, arguing that the parliament had no legal standing to summon him; parliament responded by passing a no-confidence vote.

Karzai’s decree could bring that crisis to a close, but only if legislators agree to accept it.

“It’s so muddled. The aim of this statement was not to bring clarity, but to push through a compromise,” said Martine van Bijlert, an analyst with the Kabul-based Afghanistan Analysts Network. “The question is whether the compromise will go through as agreed.”