Syrian troops have entered the city of Hama after thousands of residents took to the streets in defiance of a government crackdown on recent large protests, residents said.

“Heavily armed security forces encountered the demonstrators and started to fire randomly at all people,” Abu Ziyad, an activist based in Hama, told Al Jazeera on Monday.

“People began gathering outside the hospital as they rushed the victims there, then the security arrested people randomly during the noon prayers,” Ziyad said.

At least 21 people were injured in the shooting, including a 2004 Olympic boxing champion, the AP news agency reported. Nasser al-Shami won a bronze medal in 2004 in Athens and was wounded by a shotgun blast on Monday, a London-based human rights activist who talked to al-Shami’s doctor told the AP.

Another resident told Reuters that he had seen dozens of soldiers surround a house in the Mashaa neighbourhood and make arrests.

“At least 30 buses carrying soldiers and security police entered Hama this morning. They are firing randomly in residential neighbourhoods,” Ahmad, a resident, said by phone.

Tanks deployed in Hama on Sunday but later pulled back, residents said. Last week, some activists estimated that around 300,000 people turned out to protest against the 11-year rule of President Bashar al-Assad, the city’s largest demonstration since an uprising demanding political freedoms and Assad’s removal began nearly four months ago.

Assad removed the governor of Hama, Ahmad Khaled Abdulaziz, from his post in the wake of those protests.

“The regime is using scare tactics, but the people of Hama are not bowing,” one of the residents said.

Hama has a dark history in Syrian politics; 29 years ago, Assad’s father Hafez crushed a Sunni-led opposition movement based there, killing tens of thousands of residents.

Abdulaziz said tens of thousands of people assembled for a night rally at the main square on Sunday, despite electricity cuts intended to hamper protests.

Tens of people were earlier arrested in neighbourhoods on the edges of Hama, and secret police patrols were seen in the city, residents said.

Meanwhile, activists and a resident said Syrian forces shot dead two protesters during a demonstration in a Damascus suburb.

“It was a usual night demonstration when a hail of bullets hit. Many were also injured,” the resident, who gave his name as Abu al-Nour, told Reuters by phone from the poor suburb where  thousands of refugees from the Israeli-occupied Golan Heights live.

Omar al-Asaad, a journalist and activist, was arrested in the Damascus suburb of al-Qaddam on Sunday while he was attending a funeral for a protester, an eyewitness told Al Jazeera.

A resident of Hama said communication networks had been cut off in the city, a tactic that has been used by the military ahead of assaults on cities and towns elsewhere.

Security forces and gunmen loyal to Assad were seen in several neighbourhoods, he said.

The security presence had lessened in Hama since forces killed at least 60 protesters in the city a month ago, in one of the bloodiest days of the uprising against Assad. Residents said security forces and snipers had fired on crowds of demonstrators.

The opposition has deep roots in Hama. In 1982, under the rule of Hafez al-Assad, Bashar’s father, the army stormed the city to crush a revolt by the Muslim Brotherhood, leaving about 20,000 people dead. 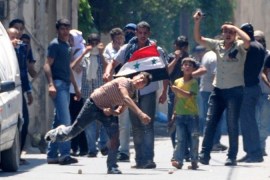 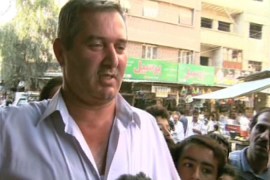 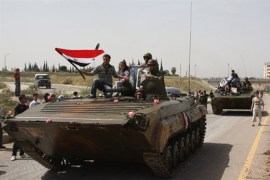 Troops kill at least four people in village of Rameh, as Syrian forces press on in a tank-led assault, activists say.