Chinese officials have ordered the shut down of two fake Apple stores in Kunming in Yunnan province, in apparent reaction to media publicity over unauthorised stores in the country, a local newspaper has reported.

A total of five self-branded ‘Apple stores’ were found to be operating without authorisation from Apple according to the Metropolitan Times report, posted on the Kunming government website on Monday.

Two stores were told to shut down because they did not have an official business licence, the paper said, rather than concerns over copyright or piracy.

Inspections of around 300 shops in Kunming were carried out after a blog post by an American living in this southwestern town exposed a near flawless fake Apple store where even the staff were said to be convinced they were working for the iPhone and iPad maker.

That store, one of three found by the “BirdAbroad” blogger in the city, was not one of the stores closed.

Countless unauthorised resellers of Apple and other brands’ electronic products throughout China sell the real thing but buy their goods overseas and smuggle them into the country to skip taxes.

Apple has just four genuine Apple stores in China, all in Beijing and Shanghai.

The company, which has 13 authorised resellers in Kunming, could not be reached for comment.

Apple’s brand is the world’s most valuable, worth some $153bn, according to a report earlier this year.

In addition to protecting trademarks, Chinese law prohibits companies from copying the “look and feel” of other companies’ stores, but enforcement is patchy.

The US and other Western countries have often complained that China is woefully behind in its effort to stamp out intellectual property theft.

In May, China was listed for the seventh year by the US Trade Representative’s office as a country with one of the worst records for preventing copyright theft.

Piracy and counterfeiting of US software and a wide range of other intellectual property in China cost US businesses alone an estimated $48bn and 2.1 million jobs in 2009, the US International Trade Commission has said. 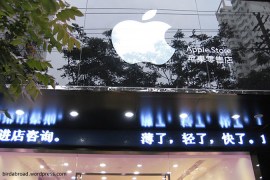 The store was stumbled upon by a blogger living in Kunming city, the capital of Yunnan province.