Hillary Clinton, the US secretary of state, has issued one of Washington’s strongest condemnations yet of Syria’s government, saying President Bashar al-Assad has lost his “legitimacy”.

“President Assad is not indispensable and we have absolutely nothing invested in him remaining in power,” Clinton told reporters on Monday.

“If anyone, including President Assad, thinks that the United States is secretly hoping that the regime will emerge from this turmoil to continue its brutality and repression, they are wrong.”

The comment comes hours after protesters loyal to Assad attacked the US and French embassies in the capital, Damascus.

The latest incident seems to have damaged what was always a tense US-Syrian relationship beyond repair.

When the popular uprising first started in March, US President Barack Obama called for the Syrian government to respect the right of the people to protest.

The US, along with the European Union, then imposed a series of sanctions on Damascus in the wake of the government crackdown.

However, the Assad government has always insisted that those calling for freedom were agents of western nations trying to destablise the country.

A US official said the mob breached the wall of the embassy compound before being dispersed by Marine Corps guards.

No buildings were entered and there were no injuries to embassy personnel, but one of the office buildings was damaged and Syrian security forces were slow to respond, the official said.

The official further said the Obama administration would formally protest and may seek compensation for damage caused by the attack.

Following the embassy assault, the residence of Robert Ford, the US ambassador, was attacked by a mob.
The state department had earlier said it would summon a senior Syrian diplomat to condemn the assault and demand that Syria uphold international treaty obligations to protect foreign diplomatic missions.

Al Jazeera’s Rosiland Jordan, reporting from Washington DC, said that US authorities had accused Syria of using the embassy attacks “as a diversion from protests against Assad”.

At around the same time the US embassy was targeted, security guards at the French embassy in Damascus had to fire into the air and use tear gas to drive back Assad supporters.

One witness said three protesters were injured when embassy guards beat them with clubs.

“Syrians demonstrated peacefully in front of the French embassy but they were faced with bullets,” Hiam al-Hassan, a witness, said.

“[Syrian] security forces are supposed to protect or ensure the safety of our personal officers and of our buildings,” a spokesperson for the French foreign ministry said.

Al Jazeera’s Rula Amin, reporting from Beirut in neighbouring Lebanon, said that security in Syria is so tight that the protesters would not have been able to get so close to the embassies without approval from the government.

The mob attacks occurred just days after the US and French ambassadors visited the opposition stronghold of Hama in central Syria.

The Syrian government called the visits to Hama interference in the country’s internal affairs and accused the ambassadors of undermining Syria’s stability.

US Ambassador Ford has of late harshly criticised Syrian government’s response to the protests.

He attacked the government on Sunday for allowing rallies by supporters while beating up anti-government demonstrators.

Speaking in Turkey, the former judge Haitham Al-Maleh said the aim of this shadow government was to help steer the country towards free elections and a new constitution.

“Each shadow minister will have a portfolio and a team of people working on specific goals,” Haitham Al-Maleh said.

“All the Syrian people know that Assad’s regime will eventually collapse and therefore we must prepare ourselves.” 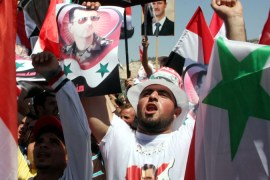 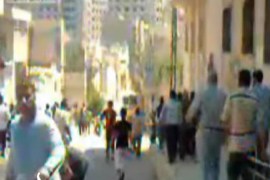 About 1,000 people have fled the city fearing another crackdown on protests, rights group says.