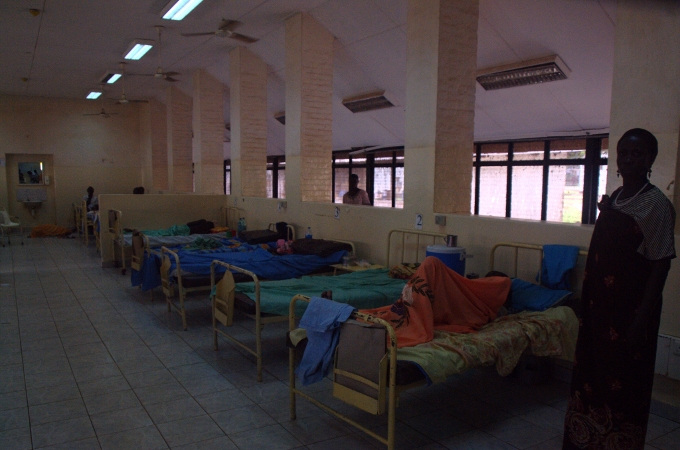 Juba, South Sudan – It is a Sunday, the day after independence day, and most of South Sudan is closed for business – but there is no time off for Robert Napoleon, the senior medical officer at Juba Teaching Hospital, the country’s largest.

On a break from his rounds on a Sunday afternoon – “this is not supposed to be a working day,” he said ruefully – he explained that the hospital handles some 200 patients per day, twice its optimum capacity, because many South Sudanese simply have nowhere else to go.

The chief problems at Juba Teaching Hospital are malaria, gastroenteritis and pneumonia, all of them preventable – but rampant in South Sudan because of poor sanitation and health care.

A lack of proper primary care facilities in South Sudan means the doctors here are often overworked: Many of the doctors at the hospital come to work seven days a week; Mergani Abdallah, an obstetrician/gynecologist, said he couldn’t remember the last time he had a full day off.

“I’m always on call, so I have to at least come check the ward for a few hours,” he said, slumped in a plastic chair near the hospital gate on a balmy Sunday afternoon.

And a lack of money means they are under-equipped, as well. The government in Juba does not give them enough to buy the supplies they need, and donations from the international community do not fill the gap.

South Sudan’s health ministry has big plans for the next few years. A new hospital in the capital, John Garang Memorial Hospital, “will provide international standards of care,” a spokesman said. New medical schools will open in each of South Sudan’s ten states. A blood bank is under construction in Juba.

In the short term, though, South Sudan’s health care system simply cannot keep up with demand.

The health ministry has plans to open a network of primary care centres – roughly one per 15,000 people – but none are fully operational. And the military and police hospitals are closed, forcing hundreds of thousands of soldiers and officers to seek care from civilian facilities.

Most of the medical care in South Sudan is therefore provided by international aid groups – 80 per cent, according to Medecins Sans Frontieres. Many South Sudanese in rural areas have to walk for days to reach a clinic.

“Seventy-five per cent of people do not have access to even basic health care,” Terri Morris, the head of MSF’s mission in Juba, said.

Maternal death statistics are much lower at Juba Teaching Hospital: Abdallah said two or three women die of pregnancy-related problems each month, out of roughly 600 deliveries. But the leading causes of those deaths – postpartum bleeding and sepsis – do not have to be fatal.

“That’s the absurdity of our situation. In the developed world, all of these causes of death are preventable. All of them,” Abdallah said. “But here, what are we supposed to do? If there is bleeding, we have no blood bank. If a woman has sepsis, we often do not detect it until it is too late.”

Abdallah said the hospital has recently changed its policies, requiring mothers to remain for at least two hours after childbirth, which gives doctors a chance to detect immediate problems.

The news is not all negative: Juba has not had an outbreak of acute diarrhea since 2008, Napoleon said, mostly because of better water supplies in the capital. Incidences of malaria and gastroenteritis – the main reasons people seek treatment – have also decreased. Traffic accidents, not infectious diseases, are now the biggest cause of emergency room visits.

Juba Teaching Hospital was completely renovated in 2006, and several other wings have been added since then. The United Nations supplies much of the equipment; the Turkish government donated an X-ray machine in 2008. 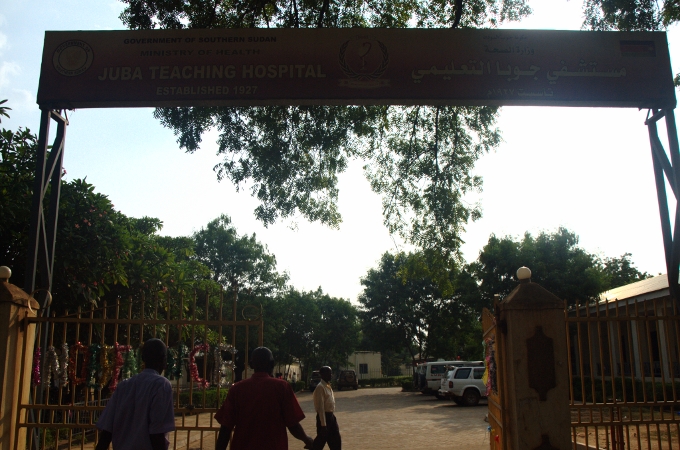 The hospital is South Sudan’s oldest, and by far the largest and best-equipped in the new country

Basic treatment at the hospital is free, except for a one pound ($0.33) admission charge. Specialist referrals cost 5 pounds ($1.65); prescriptions for outpatients have to be filled at private pharmacies outside the hospital.

But long waits are common, especially to see specialists. Edward Luka, sitting with his wife in the hospital’s austere waiting area, said he had been waiting for more than three hours to see his brother – who, in turn, waited for four hours on Sunday morning to receive treatment for acute appendicitis.

Taban Cosmas, 34, said he had been waiting more than two hours to see a dentist.

“This is the only hospital. The quality of the care is good, but the problem is that the doctors are few,” he said, grimacing from the pain in his mouth. “I don’t know when they will be able to see me.”

The wait would almost certainly be shorter if South Sudan’s hospitals had more nurses. Juba Teaching Hospital has no trouble finding doctors: The internal medicine wing has grown from just two doctors in 2006 to 10 today, Napoleon said. But he described the nursing shortage as “severe.”

“During the war we had a lot of nurses because they fled from other areas to Juba,” Napoleon said. “But now their states have called them back, and so there is a shortage.”

The World Health Organisation recommends that nurses provide most primary care, and that hospitals maintain a two-to-one ratio of nurses [and midwives] to doctors. At Juba Hospital, the ratio is closer to one-to-one.

“Of course this means the staff are overwhelmed,” Abdallah said. “There are not enough midwives, and the ones we have are often not so qualified. They are village midwives, and they don’t always have the right training.”

Equipment shortages are common because of a lack of funding. Napoleon said that basic medicines were often in short supply, and that the hospital needs a dialysis unit – and staff trained to use it.

Abdallah said that the hospital only receives five delivery chairs each year from the United Nations Population Fund, and that they quickly fall into disrepair. His wing does not have enough beds or fetal monitors, either.

Doctors at the hospital are skeptical that the government will resolve any of these problems quickly – though Napoleon said he does appreciate one recent government project.

“At least the road outside is now tarmac,” Napoleon said, gesturing to the two-lane street outside the hospital’s main gate, until recently a dirt road.

“So at least we do not have as much dust blowing into our surgical ward.”