The Arab League has said it backs seeking UN recognition for a Palestinian state, as Qatar proposed at a meeting that the Middle East peace process be suspended until Israel was “ready” for talks.

At a meeting of an Arab monitoring committee chaired by Qatar, the Arab League said in a statement it “supports the appeal to the UN asking that Palestine, within the 1967 borders, becomes a full-fledged state” of the international organisation.

The Arab League’s statement on Saturday came soon after Mahmoud Abbas, the Palestinian president, reiterated his determination to seek the recognition at the world diplomatic body unless Israel begins negotiations on “substantial basis”.

Qatar proposed at the meeting that the Middle East peace process should not be resumed until Israel was “ready,” Al Jazeera has reported.

“We will suspend for the moment the peace process until there is a willing partner” in negotiations from the Israeli side, Sheikh Hamad bin Jassem Al Thani, the Qatari prime minister, said as he opened the Arab monitoring committee meeting.

The meeting was examining the latest developments concerning the Palestinian issue following a proposal from Barack Obama, the US president, to resolve the long-standing dispute.

In a keynote policy speech on May 19, Obama issued a clear call for Israel and the Palestinians to use the borders existing before the 1967 Six Day War as the basis for talks to achieve a negotiated solution to the conflict.

Such a state would include the Gaza Strip, the occupied West Bank and mostly Arab but Israel-annexed east Jerusalem, with some adjustments and land swaps so that Israel can maintain settlement blocs.

Obama also hoped that progress on border security would then allow to move towards a solution on “the future of Jerusalem and the fate of Palestinian refugees”.

The Qatari premier also criticised “US hesitations that led Washington to abandon efforts to make Israel respond favourably to initiatives” for peace.

Binyamin Netanyahu, the Israeli prime minister, rejected Obama’s proposal outright, saying the Jewish state would be “indefensible” if it returned to the borders which existed in 1967, which would not include dozens of settlements.

He also rejected dividing the holy city of Jerusalem. The Palestinians want east Jerusalem as the capital of their future state. Sheikh Hamad said Netanyahu’s speech “proves that Israel does not want peace”.

On Saturday, Abbas again expressed his determination to head to the United Nations in September to seek recognition for a Palestinian state.

“Our option is still negotiation, but it seems that because of conditions imposed by Netanyahu … we have no choice but to use the UN to get recognition of our state,” he said, repeating the warning he made soon after Netanyahu’s US speech.

“We are serious in our decision to use the UN, it is not manoeuvring … we will do it unless Netanyahu accepts to begin negotiations today on a substantial basis.”

Abbas had previously said that Netanyahu’s US speech had “torpedoed” any chance of negotiation.

On Friday, Joseph Deiss, the UN general assembly president, had said that to be recognised at the UN, a Palestinian state will need the support of all five veto-wielding permanent members of the Security Council, which seems unlikely. 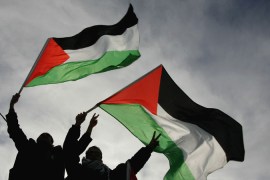 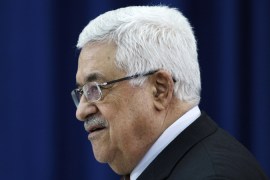 Abbas: Palestine to go to UN in September

Abbas determined to take diplomatic campaign to UN after Netanyahu rules out peace negotiations based on 1967 borders. 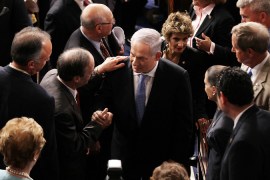 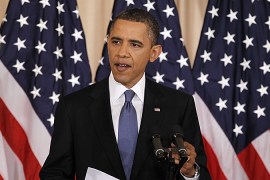