Osama bin Laden, the leader of al-Qaeda and once the most-wanted fugitive on the US list, has been killed in a firefight with American forces in Pakistan and quickly buried at sea, after a decade on the run.

Long believed to be hiding in the mountainous tribal region between Pakistan and Afghanistan, Bin Laden was tracked down in a custom-built mansion in the Pakistani town of Abbottabad, 61km north of the capital, Islamabad.

Confronted by elite US forces who dropped by helicopter into the compound, bin Laden was shot dead in a 40-minute operation under the cover of night, US officials said.

Barack Obama, the US president, said on Monday that the world was a safer place without bin Laden.

“Justice has been done,” Obama announced a day earlier in a televised address, sparking jubilant celebrations across the US.

Crowds gathered to celebrate outside the White House in Washington, DC, as well as in New York City – one of the sites of the September 11 attacks.

But celebrations over the operation were tempered by fears of retaliation, and the US quickly issued security warnings to Americans worldwide.

“A small team of Americans carried out the operation with extraordinary courage and capability,” Obama said.

“After a firefight, they killed Osama bin Laden and took custody of his body.”

Four people, including one of bin Laden’s sons, were also killed in the operation, US officials said.

After the firefight, US officials said they used “multiple methods” to positively identify bin Laden’s remains.

US officials said later on Monday that DNA tests confirmed the death, providing a match with 99.9 per cent confidence.

The US is believed to have collected DNA samples from bin Laden family members in the years since the September 11, 2001, attacks that triggered the US-led invasion of Afghanistan.

Unnamed US officials said bin Laden’s body was quickly buried in the waters of the north Arabian Sea after the operation, adhering to Islamic procedures including washing the corpse.

“We wanted to avoid a situation where it would become a shrine,” the AFP news agency quoted one official as saying.

John Brennan, the White House counterterrorism chief, said Obama had monitored the raid from the White House and expressed relief that US forces had finally caught bin Laden without losing any more American lives.

He said US officials are weighing whether to release photographs of bin Laden’s body amid calls from US lawmakers to prove the al-Qaeda leader is dead.

“We are going to do everything we can to make sure that nobody has any basis to try to deny that we got Osama bin Laden,” Brennan told reporters on Monday.

“And so, therefore, the releasing of information, and whether that includes photographs – this is something to be determined.”

According to Al Jazeera’s Rosiland Jordan in Washington, the operation had been in the making for the last nine or 10 months.

“The fact that it happened inside Pakistan, there have been suggestions that Pakistani intelligence may have been protecting them,” she said.

Patty Culhane, another Al Jazeera correspondent, said US authorities received intelligence last September and were able to track bin Laden down through his couriers.

They followed them to the compound, which was reported to be worth over a million dollars.

In his announcement, Obama said: “The death of bin Laden marks the most significant achievement to date against al-Qaeda.”

He said the “United States is not and will never be at war against Islam. Bin Laden was not a Muslim leader, in fact, he slaughtered many Muslims”.

The commentator, going by the online name Assad al-Jihad2, posted on websites a long eulogy for bin Laden and promised to “avenge the killing of the Sheik of Islam”.

Elsewhere, the announcement of bin Laden’s death was met with varied responses.

Ban Ki-moon, the secretary-general of the UN, called the death a “watershed moment”. “This is a day to remember the victims of terrorism here in the United States and everywhere in the world,” he said at UN headquarters.

“The fight against terror goes on, but tonight America has sent an unmistakable message: No matter how long it takes, justice will be done,” he said in a statement.

In Afghanistan, Qais Azimy, Al Jazeera’s correspondent in Kabul, said Afghan officials described bin Laden’s killing as a “symbolic victory”, since he was no longer directly connected to the group’s field operations.

Mark Kimmit, a US military analyst, said bin Laden’s death “was not the end of terrorism, but an end of a chapter.”

It is, however, a major accomplishment for Obama and his national security team.

Bush had repeatedly vowed to bring to justice the mastermind of the September 11 attacks on New York and Washington, but never did before leaving office in early 2009.

Bin Laden had been the subject of a search since he eluded US soldiers and Afghan militia forces in a large-scale assault on the Tora Bora mountains in 2001.

The trail quickly went cold after he disappeared and many intelligence officials believed he had been hiding in Pakistan.

While in hiding, bin Laden had taunted the West and advocated his views in videotapes spirited from his hideaway.

Besides September 11, the US has also linked bin Laden to a string of attacks – including the 1998 bombings of American embassies in Kenya and Tanzania and the 2000 bombing of the warship USS Cole in Yemen. 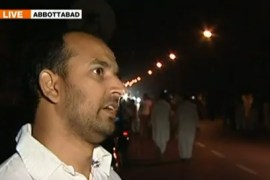 An Abbottabad resident recounts witnessing US raid on Osama bin Laden’s mansion in the Pakistani city. 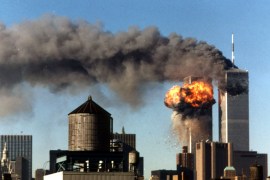 Pictorial gallery on al-Qaeda’s top leader, the alleged mastermind behind the 9/11 attacks on the US. 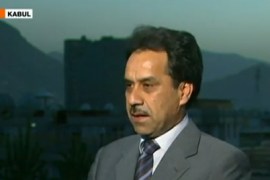 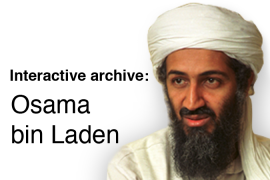 A look at Al Jazeera’s coverage of Osama bin Laden over the years.