Groups of Libyan rebels and civilians have fled from the eastern town of Ajdabiya after a rebel armoured unit was hit by apparent NATO air strikes, allowing government troops to advance.

Families packed into cars and lorries on Thursday and joined rebel military vehicles in a convoy heading northeast towards the de facto opposition capital of Benghazi, around 160km away.

Libyan state television claimed that forces loyal to longtime leader Muammar Gaddafi had entered Ajdabiya, but residents said they could see no sign of them.

The retreat began soon after rebel tanks were hit by an air strike around midday near the key oil town of Brega, 80km west of Ajdabiya. Many rebel fighters remained in the town along with doctors at the hospital, after its patients were evacuated to Benghazi as a precaution, Ajdabiya Hospital administrator Majbali Yunis said.

Another hospital official, Mohamed Idris, said at least five people were killed and 22 injured in the strike, including some with serious burns.

Al Jazeera’s Laurence Lee, reporting from Benghazi, said that after the initial assumption that it must have been a friendly fire incident, a separate story had emerged that maybe it was not a NATO strike.

“Maybe it was a light plane, presumably hired by Gaddafi’s forces, which hit the tanks,” he said.

“Whichever way you look at it, it’s not very good for the rebels. Clearly if it was NATO, that demonstrates once again the enormous rift in communication between the rebels and NATO. If NATO says ‘no, it wasn’t us,’ then you can only assume that Gaddafi is getting weaponry and indeed light aircraft from abroad.”

Rebels had informed NATO that they were moving around 20 T55 and T72 heavy tanks from Benghazi to Brega, he said, while another commander, Ayman Abdul-Karim, told the AP news agency that rebels had followed NATO advice to avoid friendly fire and painted the tops of their vehicles with yellow markings.

Saleh Faraj, a former soldier siding with the rebels, said at least three rebel tanks were hit in the air strike.

“There was no fighting anywhere. [The warplanes] flew back and forth and then they struck our forces,” Faraj said.

In Brussels, NATO said it was trying to confirm the reports and that the situation along the coastal highway where most of the fighting is taking place “is unclear and fluid, with mechanised weapons travelling in all directions.” The alliance also warned that it would strike any forces threatening civilians.

The rebel setback came as the Turkish government suggested a “roadmap” towards a negotiated end to the conflict, which began when peaceful protests against Gaddafi’s 41-year regime broke out across the nation on February 15.

Prime Minister Recep Tayyip Erdogan said Gaddafi should halt his attacks on cities and withdraw his forces, and that a “comprehensive democratic transformation process that takes into account the legitimate interests of Libyan people should start immediately.”

Erdogan’s foreign minister, Ahmet Davutoglu, had already met with Libyan Deputy Foreign Minister Abdelati Laabidi in the Turkish capital on Monday, though the Turks said the contacts were “at a very early stage.”

A contact group on Libya arranged at a conference in London on March 30 is set to meet in Qatar on Wednesday, and Turkey said it would share its roadmap plan there.

Turkey has sent military ships to enforce a naval blockade of Libya and has arranged humanitarian medical aid vessels to ferry wounded out of the city of Misurata, which has been under attack from Gaddafi’s forces for weeks. It has also delivered supplies to Benghazi.

Opposition forces seized Ajdabiya on March 26, a week after coalition forces, through air strikes and cruise missiles, beat Gaddafi’s forces back from the gates of Benghazi.

After edging to within 60km of Gaddafi’s hometown of Sirte on March 28, the rebels have since been steadily pushed back almost 400 km by the superior firepower of Gaddafi’s forces, despite the coalition air strikes.

Though France’s foreign minister said the only remaining question was how Gaddafi’s regime would end, US General Carter Ham, the head of Africa Command, said in Washington DC that it was unlikely rebel forces could push Gaddafi out themselves.

Asked at a Senate hearing about the chances that the opposition could “fight their way” to Tripoli and replace Gaddafi, Ham replied: “Sir, I would assess that as a low likelihood.”

His comments underscored growing concern in Washington and European capitals that the conflict is heading towards a stalemate, with Gaddafi firmly in control in Tripoli and badly organised rebels unable to turn the tide even under the cover of NATO-led air power.

Rebels say they need to buy more high-powered weaponry from abroad and would welcome foreign trainers to help them teach fighters how to use them, but so far no countries have acknowledged that they will sell weapons to the rebels.

On Thursday, however, General Abdel Fattah Younes, the rebel military commander, said publicly for the first time that Qatar had provided the rebels with anti-tank weapons. Qatar was the second country to recognise the opposition Transitional National Council as Libya’s legitimate government and has said it will market rebel oil.

Meanwhile, the United Nations called for a halt to hostilities in Misurata, around 215km east of Tripoli, saying several weeks of “heavy shelling” by Gaddafi’s forces had killed or wounded hundreds.

UN chief Ban Ki-moon made a new “urgent call for an immediate cessation of the indiscriminate use of military force against the civilian population,” his spokesman said.

“Conditions in Misurata are especially grave, with reports of the use of heavy weapons to attack the city, where the population is trapped and unable, as a result of heavy shelling that has continued over several weeks, to receive basic supplies, including clean water, food, and medicines,” he said.

Rebels in Benghazi are using fishing vessels and tugboats to send food, medicine and military supplies – including weapons, ammunition and men – to help defend the city.

Meanwhile, a ship chartered by the UN World Food Programme arrived in Misurata carrying 600 tonnes of foodstuffs that the WFP said could feed more than 40,000 people for a month. 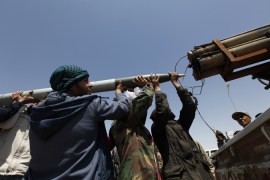 The fight for Libya’s oil 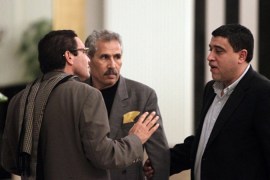 Diplomatic efforts to end the Libya crisis reach a stalemate as Gaddafi sends his envoy to Europe.