A diplomatic push by Muammar Gaddafi’s regime to end the country’s conflict has run into trouble as the opposition said it rejected any proposal that would leave the Libyan leader or his sons in power.

“This war has shown everyone and the world that Gaddafi’s sons are no different from him,” Iman Bughaigis, the opposition spokeswoman, said in Benghazi. “They are two sides of the same coin.”

“Gaddafi has been waging a war on our people with the help of his sons’ militias and mercenaries, so we see no difference between them. There is no way to negotiate with this regime.”

The New York Times reported on Monday that Saif al-Islam and Saadi Gaddafi, two of the Libyan leader’s sons, have created their own plan to remove their father from power amicably and negotiate an end to the conflict.

However, US officials said they had no information about a plan involving Gaddafi transferring power to one of his sons.

“Ultimately it’s not something that the US needs to decide,” Mark Toner, the state department spokesman, said.

He also indicated that the US was not yet ready to recognise the Libyan opposition, though he said “we continue to advise them and communicate with them regularly”.

Turkey had previously suggested that Gaddafi step down after appointing a transitional figure who can begin a reconciliation process.

Meanwhile, Turkish officials, seeking to broker a ceasefire in Libya’s civil war, said on Tuesday there was no breakthrough in sight with the two sides disagreeing over whether Gaddafi should stay or go.

Ahmet Davutoglu, the Turkish foreign minister, met an envoy from Gaddafi’s government on Monday to talk through broad conditions for a ceasefire and political solution to the conflict, while a delegation from the rebel side is expected to visit Ankara in the coming days for similar discussions.

“Both sides have a rigid stance,” a Turkish foreign ministry official said.

At the UN’s headquarters in New York, Abdelilah al-Khatib, the secretary-general’s special envoy to Libya, who visited Tripoli on March 31 and Benghazi on April 1, said that Libyan authorities were willing to accept a ceasefire.

Al-Khatib told the Security Council that Mustafa Abdul-Jalil, the opposition leader, insisted that Gaddafi first must leave, his forces must withdraw and the Libyan people must be allowed to express their opinions freely – conditions the government rejected.

On Monday, a government spokesperson said the Libyan government is ready to negotiate reforms, such as elections or a referendum, but only its own people can decide whether Gaddafi should stay on as leader.

“We could have any political system, any changes: constitution, election, anything, but the leader has to lead this forward. This is our belief,” Musa Ibrahim, the Libyan information minister, told reporters on Tuesday.

The head of the African Union has called for a ceasefire in Libya, saying the conflict in this north African is an internal problem. 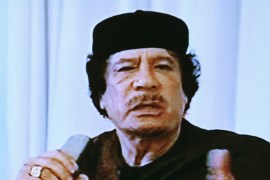 Information minister says the people will decide their own future, calling Gaddafi a “safety valve” for unity in Libya. 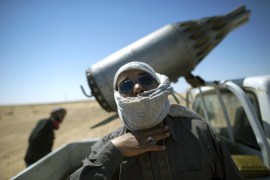 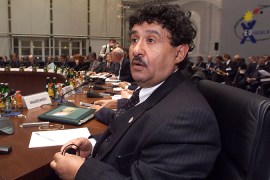 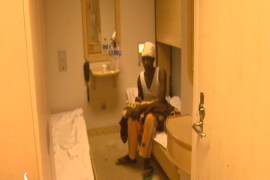