Libyan leader Muammar Gaddafi has called for an international investigation into the unrest rocking his country, as forces loyal to him fight hard to hold on to their territory.

In an interview released on Sunday with the French newspaper Le Journal du Dimanche, Gaddafi said he wants the United Nations or the African Union to investigate the violence.

“First of all I would like that an investigatory commission of the United  Nations or the African Union comes here to Libya,” he said. “We will let this panel work unhampered.”

Gaddafi said he would be in favour of France “co-ordinating and leading” the investigation.

He also used the interview to lash out at Western nations for turning their backs on him, saying that he was embroiled in a fight against terrorism.

“I am surprised that nobody understands that this is a fight against terrorism.

“Our security services co-operate. We have helped you a lot these past few years. So why is it that when we are in a fight against terrorism here in Libya no one helps us in return?”

The Libyan strongman also said three Dutch soldiers captured in Libya during an unauthorised rescue operation were “prisoners” and added that this was “normal”.

The three were taken captive in Sirte in the north of Libya last Sunday in a botched attempt to evacuate two civilians, a Dutch engineer and one other European, by navy helicopter.

Gaddafi, who has ruled Africa’s fourth largest country since a 1969 coup, faces an unprecedented popular uprising that has seen rebel forces assert control over Libya’s east and loosen his grip in the west near the capital. Tripoli.

In his interview, he warned that war would engulf the Mediterranean if the uprising in Libya, inspired by successful pro-democracy protests in neighbouring Egypt and Tunisia, succeeded.

“There would be Islamic jihad in front of you, in the Mediterranean,” he said.

“Bin Laden’s people would come to impose ransoms on land and sea. We will go back to the time of Red Beard, of pirates, of Ottomans imposing ransoms on boats.”

Gaddafi added that his government was “doing well” despite the armed turmoil and warned Europe against an influx of Libyan migrants to its shores if he is driven from power. 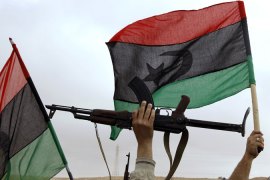 More than 30 people killed as opposition fighters force back government troops in western town of Az-Zawiyah. 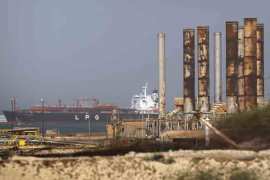 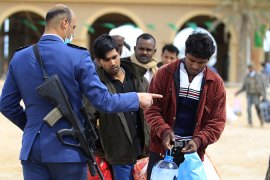 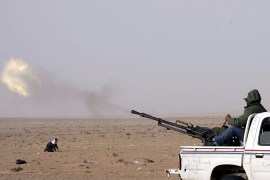