Thousands of people have converged on Baghdad’s Tahrir, or Liberation, Square to protest against corruption and unemployment, despite a vehicle ban that forced many to walk for hours to the heart of the Iraqi capital.

Al Jazeera’s Jane Arraf reported from Baghdad that the situation was heading towards a stand-off, as security forces demanded the protesters leave, blocking their route across a bridge leading to the Green Zone, where the government has its base.

Concrete blocks were set up by authorities on all of Baghdad’s bridges ahead of the protests.

“What we’re seeing here is a bit of a test, of how the government will respond when these people clearly want their demands to be heard,” Arraf said.

The protests in Iraq are growing in size, partly because of the instability of the coalition government formed by Nouri al-Maliki, the country’s prime minister, Arraf said.

Iraqis are increasingly unwilling to accept the nature of the democracy that has emerged in years after Saddam’s regime was overthrown.

“This is a new democracy, it’s an unusual democracy, and it’s not exactly what people bargained for,” she said.

“On top of that, people are looking around protests in Egypt and Tunisia … It has shown them, particularly these young people that if they come out and demand their rights, perhaps something will happen.”

The Baghdad demonstration was one of many taking place across the country on Friday, including in the port of Basra and the city of Najaf.

In the southern city of Basra, about 1,000 people gathered at the Basra provincial council building to rally against corrupt officials and poor basic services. Iraqi security forces used water cannon and batons to disperse the crowds.

Last week the protests in Basra led to the resignation of the governor. This week, protesters demanded that the provincial council step down and essential services such as water and electricity be improved.

Demonstrations have been taking place in Iraq for the past month, with protesters decrying a lack of improvement in their daily lives, eight years after the US-led invasion that ousted the late Iraqi leader, Saddam Hussein.

The biggest of the rallies took place last Friday, when Iraqis took to the streets of at least 17 cities and towns. A total of 16 people were killed and more than 130 wounded as a result of clashes on that day.

The demonstrations, inspired by revolutions in Egypt and Tunisia, have concentrated on demands for improved government services, better pay and an end to corruption in Iraq.

“Our country is lost and for the last eight years the government has failed to offer services for people. Thousands of youths are without jobs,” Bahjat Talib, who joined the protest in Baghdad, said.

He said he walked from the vast slum in eastern Baghdad called Sadr City through eight checkpoints to get to the square.

Talib said he had to tell security forces that he was going to work or they would refuse to let him pass.

He was one of about 500 demonstrators in Liberation Square, surrounded by what appeared to be even more security forces.

“People will continue demonstrating until there is reform because the government has been built on a sectarian basis,” said Faisal Hamid, a pensioner who walked to Tahrir Square from the nearby neighbourhood of Karrada.

The Iraqi government, worried the demonstrations may spiral out of control, have taken strict measures that appear designed to limit the number of demonstrators who come out.

Late Thursday, they imposed a vehicle ban in the capital so many of the protesters were forced to walk for miles. Similar vehicle bans were in place in the northern cities of Mosul and Kirkuk, and the southern city of Basra.

Side streets leading up to the square were blocked with security vehicles and helicopters buzzed overhead in Baghdad.

Before those protests, Iraqi officials tried to discredit the demonstrations by saying they were being backed by supporters of Saddam and al-Qaeda. The warnings seemed designed to keep people away and paint those who did take part in a bad light.

Ammar Ziad, a finance ministry employee who was protesting at Tahrir Square, on Friday, rejected the claims.

“We are not Baathists, we are just Iraqis asking for simple rights like services,” he said.

Demonstrators this Friday took measures to protect themselves, showing the distrust many feel toward the security forces.

Kamil al-Assadi, a resident of Sadr City, formed a committee checking demonstrators entering the square because they were worried the security forces might plant people in the crowd to create problems.

“We do not trust the Iraqi security forces and formed a committee to check the demonstrators to make sure that no one is carrying a knife or any kind of weapon who aims at creating any problems during the demo,” he said. 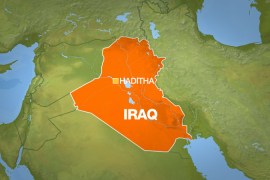 At least nine killed in suicide attack that targeted people queueing up to collect salaries in city of Haditha. 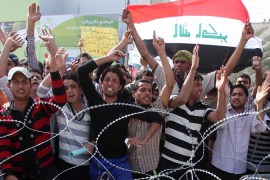 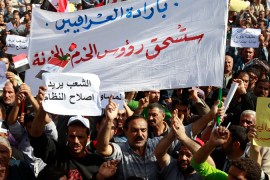 At least 12 protesters killed by security forces, amid nationwide “day of rage” against corruption and poor services.

Thousands gather in Baghdad and northern Iraq demanding improved services and an end to corruption and food scarcity.