At least three people are reported killed in clashes between Syrian anti-government protesters and security forces in the coastal city of Latakia, where mourners attending a funeral set fire to the local Baath Party building and a police station.

Syrian officials said Saturday””s killings in the port city 350km northwest of the capital, Damascus, were carried out by sniper fire.

Bouthaina Shaaban, a Syrian presidential advisor, said an “armed group” had occupied the roofs of some buildings and was allegedly shooting randomly at citizens.

“There is a project to sow strife in Syria,” she said in Damascus.

There were also witness reports of Syrian security forces firing tear gas on several hundred protesters who staged a silent sit-in near a mosque in the southern city of Daraa.

The clashes came as authorities freed about 260 political prisoners in an apparent attempt to appease demonstrators following a week-long crackdown that has left dozens dead, according to activists and human rights groups with Amnesty International claiming 55 had been killed.

In Tafas, south of the capital Damascus, angry residents set ablaze a police station and the local headquarters of the Baath party, which has ruled Syria single-handedly for close to half a century.

The residents had gathered for the burial of three demonstrators who had been shot dead by security forces in rallies on Friday.

In Daraa, a tribal town that has emerged as the symbol of the Syrian protests, some 300 shirtless young men climbed on the rubble of a statue of Hafez al-Assad, the former Syrian president, shouting anti-regime slogans, witnesses said.

Protesters had pulled down the statue on Friday in a scene that recalled the toppling of Saddam Hussein”s statue in Iraq in 2003 by US troops. They had also burned the home of the governor.

Officials have confirmed 27 killed in clashes between demonstrators and security forces, 20 of them protesters, in cities including Homs, Sanamin, Daraa and Latakia since the rallies began on March 15.

Activists have put the death toll at more than 126, with upwards of 100 killed on Wednesday alone in a bloody crackdown on protests in Daraa, the southern tribal town that has become the symbol of the protests.

“They have released political prisoners before, more than 200 in a day is unprecedented. But this is a sensitive time in Syria with anti-government demonstrations, protesters demanding political reforms including lifting the emergency law which allows for arbitrary detention without trial.

“Those who burned government buildings in the tribal villages near Daraa where funerals were held want justice. It is no longer a question of calling for political reforms or change.

“What they want is for those responsible for killing their brothers to be brought to justice. The government will have to reconcile with a lot of angry residents to contain the violence, mainly in the south.”

Syrian authorities have announced a string of reforms in an apparent bid to appease the increasingly angry demonstrators, including the possibility of ending emergency rule which has been in place since 1963.

There have also been rallies in support of Bashar al-Assad, the Syrian president, with thousands chanting their loyalty to the ruling party in Damascus on Friday.

“What happens requires that people reconcile together and not goad them against each other … what””s happening in Libya, do you want it to happen in Syria?” he told Al Jazeera television, siding with the ruling party. 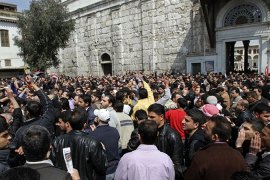 Anger in Syria over security crackdown 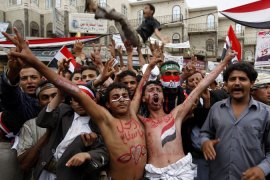 Foreign minister optimistic about transition deal, but president’s camp warns little progress has been made. 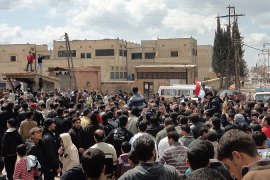 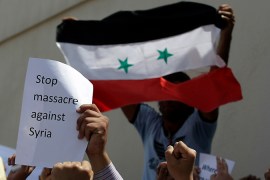 Call for protests at mosques comes despite a reform pledge by the government after many were shot dead in Daraa city.