Several thousand demonstrators turned out yet again in the capital Sanaa on Wednesday for what are now almost daily rallies against him and denied any links to the US.

“The people who come to the square are youths, free youths who have no connection whatsoever to any foreign entity, their only concern is to topple the regime,” Ali Al Sakkaf, a protester, said.

In the town of Sadr, in the country’s south, witnesses said that security forces fired tear gas and shot at hundreds of protesters, to which the demonstrators responded by setting police vehicles alight.

Hashem Ahelbarra, Al Jazeera’s correspondent in Yemen, said that one person had been killed in clashes and two police vehicles set on fire.

A hospital official in the town told the Associated Press news agency that two protesters had been shot dead in the protest.

Reports indicate that as part of that altercation, armed men may have also been attempting to seize government subsidised housing buildings.

Our correspondent also reported that 30 people had been injured in clashes between protesters and armed government supporters in Hodeidah.

Saleh, 68, a US ally already struggling to quash a resurgent al-Qaeda wing based in Yemen while keeping rebellions in the north and south at bay, has failed to stamp out protests fuelled by crushing poverty and soaring unemployment.

Yemeni protesters are frustrated with widespread corruption and nearly a third of the workforce is out of a job. More than 40 per cent of Yemen’s 23 million people live on less than two dollars a day.

“Every day the hopes for change are diminished by Saleh after 33 years of him seizing power. I think that the solution is now the departure of Saleh, no more, no less, because people are desperate,” Ali Makhlough, a protester, said on Wednesday.

Protests have gained steam during six weeks of rallies that have left 26 people dead in clashes between protesters
and police or armed Saleh loyalists.

As protesters across the country stake out camps to maintain 24-hour sit-ins, the demonstrations seem unlikely to fade soon.

The protests, led by students and activists, have been joined by religious organisations, southern separatists, tribal groups and the opposition coalition after it backed out of talks with Saleh.

The momentum against the president, who refuses to step down until elections in 2013, has kept growing since protests erupted a month ago – inspired by successful uprisings in Egypt and Tunisia.

Yemen’s opposition presented Saleh with a road map on Wednesday for a smooth transition of power this year, offering him a graceful exit as street pressure continues to mount against him.

Al Jazeera’s Ahelbarra, reporting from Sanna, said: “The opposition is waiting for an answer and they have decided to organise what they are calling a Friday of warning in case they don’t get an answer.”

“The opposition describe it as a roadmap of Saleh’s departure, they want him to announce when he plans to leave. Then the opposition with the parliament will craft a new transitional plan,” he said.

“Sources say Saleh has responded favourably to the proposal of the opposition and will agree to work with the opposition on laying down the grounds for a transitional period.”

The new initiative is said to ask for the freedom of assembly to be guaranteed, as well as investigations to be launched into attacks on protesters. Victims would be given compensation and those responsible would be tried.

The timetable for a transition would put a December 2011 deadline on Saleh’s departure.

Saleh has been meeting with tribal and military leaders to try and rally support. He also offered the opposition coalition a unity government. It rejected the offer and vowed to side with protesters in the streets.

Saleh has been an important US ally in the fight against al-Qaeda, accepting tens of millions of dollars in US military and other aid and allowing American drone strikes on al-Qaeda targets.

However, on Tuesday, Saleh seemed to be turning on Washington. In a speech to about 500 students and lecturers at Sanaa University, he claimed the US, along with Israel, is behind the protest movement.

Saleh also alleged that opposition figures meet regularly with the US ambassador in Sanaa.

On Wednesday, Saleh called the White House to express regret for “misunderstandings” related to his remarks about the US and Israel.

Saleh called White House counterterrorism adviser John Brennan “to convey his regret for misunderstandings related to his public remarks that Israel and the United States have engaged in destabilising activities in Arab countries,” the White House said in a statement.

Saleh’s relationship with the US has been ambivalent, and he has at times attempted to play down his military alliance with Washington.

Anti-US sentiment remains strong in Yemen, as elsewhere in the region, and Saleh’s comments appeared to be an attempt to discredit the protesters by suggesting they are serving foreign interests. 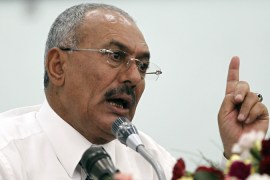 Yemen leader blames protests on US

President Saleh accuses US and Israel of destabilising his country and Arab world as fresh protests hit capital Sanaa. 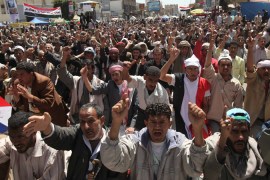 Yemen: A revolution in waiting?

In a country torn by internal divisions, the risks posed by a power vacuum must not be underestimated. 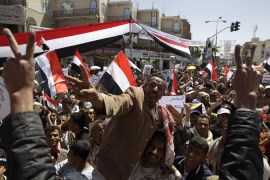