Yemeni security forces have raided an apartment shared by four Western journalists and deported them apparently over their coverage of growing anti-government protests in the country.

The expulsions on Monday came amid further demonstrations in the impoverished Gulf state.

Oliver Holmes, one of the journalists, said that said that one of the agents told him they were being kicked out because of their coverage of the protests.

“The situation in Yemen has got quite dire in the past three days,” said Holmes, a British citizen, speaking by telephone from the airport in Qatar.

“We have all been reporting on the use of violence by the police.”

The other journalists who were deported are Haley Sweetland Edwards and Joshua Maricich, both US nationals, and Portia Walker, a British citizen.

Reporters Without Borders condemned the move, noting that two other journalists – Patrick Symmes, a US citizen, and Marco Di Lauro, an Italian photographer – were deported on Saturday.

“The arrests and deportation of foreign journalists are a very worrying sign of nervousness on the part of the authorities,” the media rights group said.

“We call on the authorities to revoke these expulsions and allow all journalists to work freely,” he said.

A CPJ statement also quoted two local journalists as saying that a group of 20 people believed to be government supporters went to the Journalists Syndicate in Sanaa Monday and threatened to burn it down.

The army there had been deployed to check the nationwide protests demanding the resignation of Ali Abdullah Saleh, Yemen’s president.

Fighting intensified after protesters stormed a municipal building. Security forces fired on them, wounding 10, but could not stop them seizing the building, a local official said.

An Al Jazeera journalist reported that at least five people were wounded when Yemeni security forces fired live bullets and tear gas bombs at camps of protestors who staged a sit-in in the city of Mukalla in Hadramout governorate.

In the central Maarib province, where several oil and gas fields of international companies are located, a man stabbed Naji Zayedi, the provincial governor, critically wounding him as he and police tried to break up a crowd of thousands at a sit-in.

“Members of the opposition stabbed the governor and wounded three others as security tried to stop protesters from inciting chaos,” a local official was quoted by the Reuters news agency as saying.

Seven demonstrators and three soldiers have died in clashes since Saturday, raising the death toll from unrest to more than 30.

The US, which has long seen Saleh as a bulwark against al-Qaeda in Yemen, has condemned the bloodshed and backed the right for peaceful protest, but has insisted only dialogue can end the political crisis. 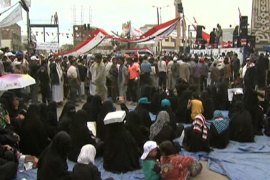 More violence as security forces crack down on anti-government protesters in Sanaa. 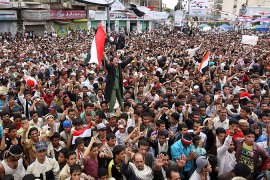 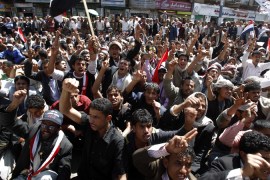 Anti-government protests continue, as more opposition groups call for president to step down. 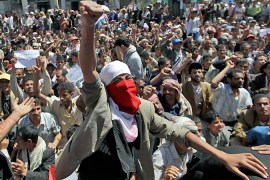 Unconfirmed reports of deaths and injuries after security forces open fire on inmates protesting against the president.