Southern Sudan has suspended talks on independence with the north’s National Congress Party, accusing the north of planning to overthrow the south’s administration.

Pagan Amum, the secretary-general of the Sudan People’s Liberation Movement (SPLM), reiterated the accusation on Sunday, saying that the northern government was arming local tribes to use as proxy forces.

“The country is in a crisis because the [National Congress Party, or NCP] has been planning and working to destabilise Southern Sudan,” he told reporters in the southern capital of Juba.

Amum said that the northern government wanted “to overthrow the government of Southern Sudan before July and to install a puppet government”.

He offered to provide documentary evidence on Monday and called on the United Nations Security Council to investigate the allegations.

Rabie Abdelati, senior ruling party official in north, told the Reuters news agency on Saturday that the accusation of a northern plot was “ridiculous”.

The suspension of talks follows an attack on Saturday by fighters opposed to the southern government, in the town of Malakal.

The southern army reported that 30 of the fighters and four southern troops killed.

There was no word on civilian casualties, but an Associated Press report quoted an unnamed UN official as saying that during the attack the fighters held hostage 103 children and used them as human shields.

Southerns in Sudan voted to secede from the north in a referendum in January, but many issues still need to be resolved, including oil-revenue sharing, the status of southerners or northerners living across the border, and who controls the disputed border region of Abyei.

“We should expect new confrontations to take place in Abyei if the SPLA is not going to withdraw the police,” Al-Dirdiri Mohammed Ahmed, the NCP’s chief negotiator on Abyei, said.

Many southerners fear the north does not want to lose southern oil revenues and the two regions may resume their decades-long civil war.

A plebiscite intended to run simultaneously with the south’s independence referendum was indefinitely postponed with neither side able to agree on voter eligibility.

At least 70 people were killed and three villages razed in two days of clashes earlier this month between fighters from the Arab Misseriya tribe, which supports the Khartoum government, and the Ngok Dinka people, who back the south.

Negotiations over the future of the volatile Abyei region were set to resume in Khartoum on Monday between Omar al-Bashir, the Sudanese president, and and Salva Kiir, the southern leader.

Thabo Mbeki, the former South African president, is due to mediate the talks.

But Amum said that these negotiations would not go ahead as planned. 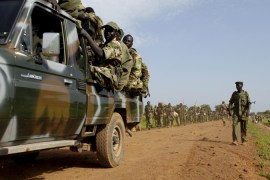 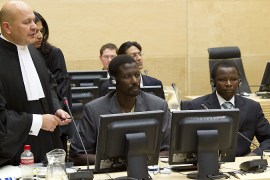 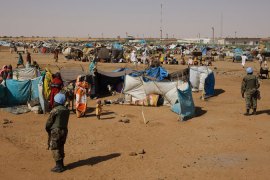 Presidential aide says vote is part of the Abuja agreement signed with rebels but failed to end eight-year conflict.