The United Nations general assembly has unanimously suspended Libya’s membership of the UN Human Rights Council, citing the government’s use of violence against protesters.

A statement said that Libya had committed “gross and systematic violations of human rights”. The vote was passed by consensus during a session of the general assembly on Tuesday.

While Libya has not been permanently removed from the council, it will be prevented from participation until the general assembly decides whether or not to restore its status.

The resolution was sponsored by Arab and African states.

Moments before the vote, Ban Ki-moon, the UN secretary-general, urged the general assembly to suspend Libya and to back international efforts to provide humanitarian aid to people in the country.

Addressing the general assembly in New York City, Ban said that more than 1,000 people had reportedly been killed in the violence in that country, and that there were “credible and consistent reports” of extra-judicial killings, arbitrary arrests and torture being carried out by government forces.

“The world has spoken with one voice: we demand an immediate end to the violence against civilians and full respect for their fundamental human rights, including those of peaceful assembly and free speech,” he said.

Ban warned that “there is no impunity … that those who commit crimes against humanity will be punished”.

He also cited reports of the government allowing “gangs” to “terrorise communities” and other acts which he termed a “clear incitement to violence against the civilian population by Colonel [Muammar] Gaddafi and his supporters”.

In particular, Ban said that the “immediate priority must be providing urgent humanitarian relief “, including food, water, sanitation and shelter, to the thousands of internally displaced people and refugees, both in Libya and in neighbouring Tunisia and Egypt.

He said there were “serious indications” of a growing refugee and displaced persons crisis, though access and information were limited.

“Time is of the essence, thousands of lives are at risk,” he said.

He called for “concrete action” to end the violence and address humanitarian aid needs, as well as for the UN security council’s recent resolution on Libya, which authorised travel bans and assets freezes, to be swifly enforced.

UN assessment teams will be deployed to organise the agency’s response to the humanitarian crisis in the coming days, and Ban said that he would also be appointing a special envoy.

He said that he would be speaking to heads of the UN humanitarian agencies, as well as heads of the Arab League, the African Union and the Organisation of the Islamic Conference to discuss the international humanitarian response to the crisis.

Ban said he had held consultations with Barack Obama, the US president, on the situation in Libya on Monday, and that he would continue to speak to other world leaders.

While the vote was unanimous, some countries did strike a note of dissent.

Jorge Valero, Venezuela’s ambassador to the UN, alleged that the United States was preparing plans to invade the North African country and siphon off its energy resources.

“We urge peace-loving nations in all regions of the world to put a stop to the invasion plans against Libya, which have
been unashamedly announced by the Department of State of the United States and the Pentagon,” he said.

“Its purpose is clear — to appropriate the vast potential of natural and energy resources that are stored in the motherland of the Libyan people,” Valero said.

Susan Rice, the US ambassador to the UN, dismissed the allegations as “delusional”, saying it was “shameful that one
member state, whose own reprehensible record speaks for itself, would manipulate this occasion to spread lies”.

Meanwhile, Mark Lyall Grant, the British ambassador to the UN, said the UN Security Council was keeping the possibility of imposing a no-fly zone over Libya “under review”. 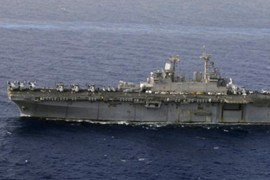 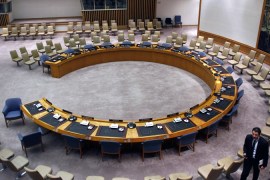 We ask what the international community can do to protect the Libyan people.

From Gaga to Tripoli

As people walk the empty weekend Washington streets to their traditional brunch spots, there”s plenty on the menu to c 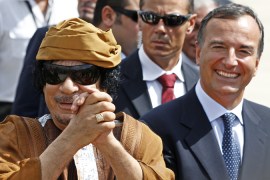