Muammar Gaddafi, Libya’s long-standing ruler, has reportedly lost control of more cities as anti-government protests continue to sweep the African nation despite his threat of a brutal crackdown.

Protesters in Misurata said on Wednesday they had wrested the western city from government control. In a statement on the internet, army officers stationed in the city pledged “total support for the protesters”.

The protesters also seemed to be in control of much of the country’s east, and an Al Jazeera correspondent, reporting from the city of Tobruk, 140km from the Egyptian border, said there was no presence of security forces.

“From what I’ve seen, I’d say the people of eastern Libya are the ones in control,” Hoda Abdel-Hamid, our correspondent, said.

She said there were no officials manning the border when the Al Jazeera team crossed into Libya.

“People tell me it’s also quite calm in Bayda and Benghazi. They do say, however, that ‘militias’  are roaming around, especially at night. They describe them as African men, they say they speak French so they think they’re from Chad.”

Major-General Suleiman Mahmoud, the commander of the armed forces in Tobruk, told Al Jazeera that the troops led by him had switched loyalties.

“We are on the side of the people,” he said. “I was with him [Gaddafi] in the past but the situation has changed – he’s a tyrant.”

Benghazi, Libya’s second largest city, was where people first rose up in revolt against Gaddafi’s 42-year long rule more than a week ago. The rebellion has since spread to other cities despite heavy-handed attempts by security forces to quell the unrest.

With authorities placing tight restrictions on the media, flow of news from Libya is at best patchy. But reports filtering out suggest at least 300 people have been killed in the violence.

But Franco Frattini, the Italian foreign minister, said there were “credible’ reports that at least 1,000 had died in the clampdown.

Amid the turmoil, a defiant Gaddafi has vowed to quash the uprising.

He delivered a rambling speech on television on Tuesday night, declaring he would die a martyr in Libya, and threatening to purge opponents “house by house” and “inch by inch”.

He blamed the uprising in the country on “Islamists”, and warned that an “Islamic emirate” has already been set up in Bayda and Derna, where he threatened the use of extreme force.

He urged Libyans to take to the streets and show their support for their leader.

Several hundred government loyalists heeded his call in Tripoli, the capital, on Wednesday, staging a pro-Gaddafi rally in the city’s Green Square.

Fresh gunfire was reported in the capital on Wednesday, after Gaddafi called on his supporters to take back the streets from anti-government protesters.

But Gaddafi’s speech has done little to stem the steady stream of defections from his side.

Libyan diplomats across the world have either resigned in protest at the use of violence against citizens, or renounced Gaddafi’s leadership, saying that they stand with the protesters.

Late on Tuesday night, General Abdul-Fatah Younis, the country’s interior minister, became the latest government official to stand down, saying that he was resigning to support what he termed as the “February 17 revolution”.

He urged the Libyan army to join the people and their “legitimate demands”.

On Wednesday, Youssef Sawani, a senior aide to Saif al-Islam Gaddafi, one of Muammar Gaddafi’s sons, resigned from his post “to express dismay against violence”, Reuters reported.

Earlier, Mustapha Abdeljalil, the country’s justice minister, had resigned in protest at the “excessive use of violence” against protesters, and diplomats at Libya’s mission to the United Nations called on the Libyan army to help remove “the tyrant Muammar Gaddafi”.

A group of army officers has also issued a statement urging soldiers to “join the people” and remove Gaddafi from power. 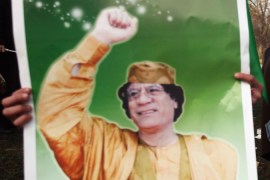 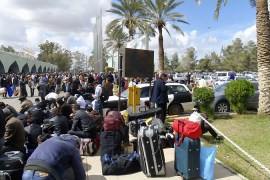 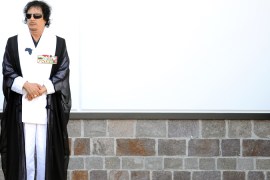 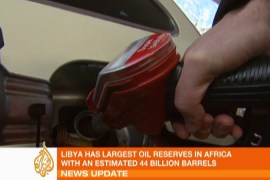