Muammar Gaddafi, the Libyan leader, has vowed to fight on and die a “martyr”, calling on his supporters to take back the streets from protesters demanding his ouster, shouting and pounding his fist in a furious speech on state TV.

Gaddafi, clad in brown robes and a turban, spoke on Tuesday evening from a podium set up in the entrance of a bombed-out building that appeared to be his Tripoli residence hit by US air raids in the 1980s and left unrepaired as a monument of defiance.

“I am a fighter, a revolutionary from tents … I will die as a martyr at the end,” he said.

He called on supporters to take to the streets to attack protesters. “You men and women who love Gaddafi …get out of your homes and fill the streets,” he said. “Leave your homes and attack them in their lairs … Starting tomorrow [Wednesday] the cordons will be lifted, go out and fight them.”

Gaddafi said “peaceful protests is one thing, but armed rebellion is another”.

He urged all young men to immediately “form local committees for popular security”, telling them to wear a green armband to identify themselves. “The Libyan people and the popular revolution will control Libya.”

The speech, which appeared to have been taped earlier, was aired on a screen to hundreds of supporters massed in Tripoli’s central Green Square.

At times the camera panned out to show a towering gold-coloured monument in front of the building, showing a fist crushing a fighter jet with an American flag on it – a view that also gave the strange image of Gaddafi speaking alone from behind a podium in the building’s dilapidated lobby, with no audience in front of him.

The Libyan leader alleged that all of those who were protesting against his rule were “drugged”, and called on people to capture them and bring them “to justice”, and not to back down from “cleans[ing] Libya house by house” unless of the protesters surrendered.

Gaddafi warned that instability in his country would create an opportunity for extremist elements, saying that it would “give al-Qaeda a base”.

He also warned that he could resort to using extreme force against opposition in the cities of Derna and Bayda, citing examples of the use of state force in Russia and China as times when the international community did not interfere.

Gaddafi offered a new constitution to citizens, starting from Wednesday, but asserted that the constitution would only come into effect through dialogue.

He blamed the uprising on Islamists who wanted to “create another Afghanistan”, and warned that those in Bayda and Derna had already set up an Islamic Emirate that would reach Benghazi, the country’s second largest city where hundreds have been reported dead in recent violence.

He said that the country’s youth was drugged and did not know anything; they were following the Islamists’ leader and their leaders would be punished with death in accordance with the Libyan law.

Just hours after Gaddafi’s speech, Libya’s interior minister, General Abdul-Fatah Younis, announced his resignation and support for what he called the “February 17 revolution”.

In a video obtained by Al Jazeera, he was seen sitting on a desk reading a statement that also urged the Libyan army to join the people and their “legitimate demands”. 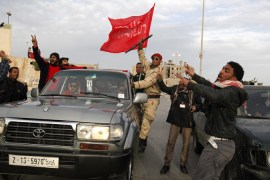 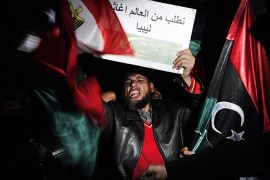 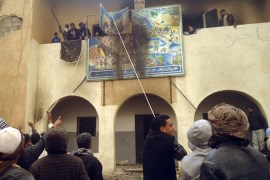 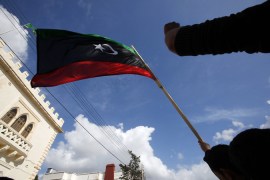 Italian navy says it is monitoring a Libyan “naval asset” in the Mediterranean, but is not clear about its intention.