The Italian navy has told Al Jazeera it is monitoring a Libyan “naval asset” that has stalled off the coast of Malta.

Malta is the closest European Union member to Libya and is located just 340km north of Libyan shores in the Mediterranean Sea.

Al Jazeera’s Cal Perry, reporting from Malta on Tuesday, said: “We’re talking to a very senior source inside the Italian army and what he’s telling us basically is that this ship has been spotted off the coast of Malta.

“There’s obviously concern on the part of the Italians – and we’ve been talking all day about the Italian-Libyan relationship. I think it’s fair to say we’re seeing tensions here rising in a way that we haven’t seen in the past.

“At about 6pm, we understand, five Italian fighter jets left the base … in southern Italy to get eyes on this ship; to take a look at this ship; where it is; what’s going on.

“There were rumours that it had lowered its flags – maybe it was a ship that’s defecting. The concern, of course, is that if this ship is not one that’s going to defect, what’s it doing in these waters?”

A report on the Times of Malta website said Maltese forces had denied they were monitoring any Libyan warship.

The developments came a day after two Libyan fighter-jet pilots defected to Malta, saying they had been ordered to fire on civilians who are protesting against the rule of Muammar Gaddafi, in power since 1969.

“Malta has become a departure point and entry point for people trying to flee Tripoli [Libya’s capital],” our correspondent said, nothing that there was chaos at the local airport.

“The smallest European Union country, this tiny island of Malta, has become the central point of European countries to get their citizens out [of Libya].

In other news from Malta, about 100 Libyans rallied on Tuesday outside their embassy on the island, burning an Italian flag in protest against Italy’s close ties with Gaddafi’s government.

The demonstrators described as “heroes” the two colonels who flew to Malta.

There were scuffles with the police, who surrounded the building.

“One of the interesting things that happpened was that as the Libyans were protesting, calling for Gaddafi to step down, some of the embassy staff inside the embassy walked out … and joined the protesters,” Al Jazeera’s Perry said.

“We’re seeing this [Libyan] government dissolved in its overseas postings, especially here in its own backyard of Malta.” 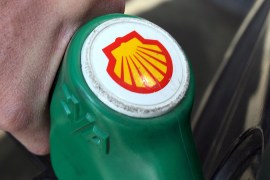 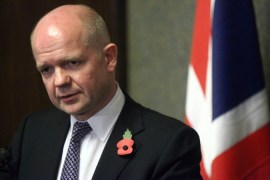 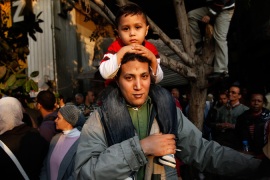 As protests spread across the country, Saif al-Islam Gaddafi vowed that the regime would “fight to the last bullet”. 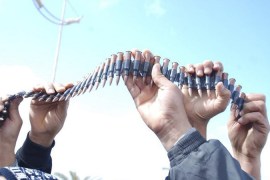