Police in India have arrested a former telecoms minister over a massive corruption scandal, officials have said.

Andimuthu Raja belongs to a parliamentary ally of the ruling Congress party and his arrest on Wednesday may spark tension between coalition partners and galvanise an opposition that has blocked parliament since November to protest the scandal over mobile phone licences.

Raja would be presented before a special court on Thursday, the CBI said.

Raja, who was sacked in November, is accused of misuse of his ministerial office to benefit others, criminal misconduct and having unaccounted assets, local television channels reported.

He belongs to the regional Dravida Munnettra Kazhagam (DMK) party from the southern state of Tamil Nadu. He has denied any wrongdoing.

The sale of below-market price licences, which a government audit says may have cost India up to $39bn in lost revenues, is the biggest scandal to have hit India in decades.

Manmohan Singh, the Indian prime minister who won re-election in 2009, is accused by the opposition of failing to act against Raja when complaints were raised.

The scandal could also overshadow Congress’s campaign to win state elections this year.

“I only wish that the prime minister instead of living in denial had acted three years ago so this huge, monumental loss to the public exchequer had not taken place,” Arun Jaitley, leader of main opposition Bharatiya Janata Party (BJP), told reporters.

But the Congress party defended Singh, saying he had acted in accordance with the law of the land.

“Nobody will accept that the credibility of the prime minster or the government has been affected,” Congress spokesman Abhishek Manu Singhvi told reporters.

“That’s absolutely wrong … the integrity of the government is enhanced by allowing law to take its own course independently and objectively.”

The opposition has shut down parliament since early November, demanding a joint inquiry into the scandal, and further disruption could hit the next session of parliament in late February when the budget is due to be debated.

With no major parties capable of winning a majority on their own in parliament, Indian governments effectively come down to coalition-juggling. The DMK, with 18 seats, is the second biggest ally of Congress in the government.

The DMK has weakened in recent years, relying on support of other parties including Congress to hold power in Tamil Nadu. As a result, it is unlikely the DMK would pull out of the coalition, because it needs Congress as much as Congress needs it.

India is the world’s second-fastest growing economy, but ranks 87th on graft watchdog Transparency International’s list based on perceived corruption – a worse rating than its neighbour China. 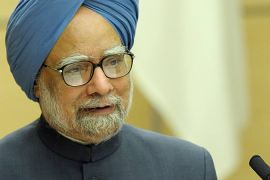