The Large Hadron Collider (LHC), famously engaged in the quest for the Higgs boson, has turned up a heavier variant of a sub-atomic particle first discovered a quarter-century ago, scientists reported on Thursday.

The newcomer is called Chi-b(3P), which was uncovered in the debris from colliding protons, according to research published in the open-access online journal arxiv.

Like the elusive Higgs and the photon, it is a boson, meaning it is a particle that carries force.

But while the Higgs is not believed to be made of smaller particles, the Chi-b(3) comprises two relatively heavy particles, the beauty quark and its antiquark.

They are bonded by the so-called “strong” force which also causes the atomic nucleus to stick together.

The Chi-b(3P) is a heavier version of a particle that was first observed around 25 years ago.

“The Chi-b(3P) is a particle that was predicted by many theorists, but was not observed at previous experiments,” said James Walder, a British physicist quoted by the University of Birmingham in a press release.

Described by some as the world’s largest machine, the LHC is located in a 27km ring-shaped tunnel near Geneva that straddles the Franco-Swiss border up to 175m below ground.

Streams of protons are fired in opposite, but parallel, directions in the tunnel.

The beams are then bent by powerful magnets so that some of the protons collide in four giant labs, which are lined with detectors to record the sub-atomic debris that results.

On December 13, physicists at the European Organisation for Nuclear Research (CERN) said they had narrowed the search for the Higgs — the so-called “God particle” that may confer mass.

The theory behind the Higgs is that mass does not derive from particles themselves. Instead, it comes from a boson that interacts strongly with some particles but less, if at all, with others.

Finding the Chi-b(3P) is a further test of the powers of the LHC, which became the world’s biggest particle collider when it was completed in 2008.

“Our new measurements are a great way to test theoretical calculations of the forces that act on fundamental particles, and will move us a step closer to understanding how the Universe is held together,” said Miram Watson, a British research fellow working on the CHi-b(3) investigation.

A massive collaborative effort that brings in physicists from around the world, the LHC has cost more than $4.5bn. 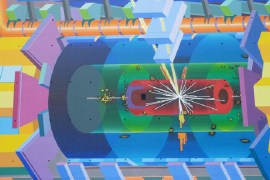 Looking for the deepest laws of the universe

Physicists at CERN crash protons together, slow down antimatter, and look for the elusive “God particle”.