Manuel Noriega, Panama’s jailed former military ruler, has returned to his homeland following extradition from France where he was severing out a prison sentence for corruption.

From 1983 to 1989, Noriega was head of Panama’s military and its de-facto leader, although he never held the presidency.

Initially, he positioned Panama as a US asset in a region that was becoming increasingly hostile to Washington’s interests.

Born to a poor family with Colombian roots in 1934, Noriega was a career soldier, receiving his training in Peru and the US.

He was commissioned into the Panama National Guard in 1967, and in 1968 promoted to lieutenant.

Noriega rose swiftly in the armed forces, becoming a key ally of General Omar Torrijos during a military coup in 1968. As the de-facto leader from 1968 to 1981, Torrijos relied heavily on Noriega’s network of loyal soldiers.

Noriega was soon promoted to head of the Panama’s secret police, a role which brought him into close contact with the CIA.

The US intelligence agency had a vested interest in protecting the strategic trade route of the Panama Canal, which was under US administration until 1977.

Noriega soon became a regular informant for the Americans and was rewarded with an estimated $320,000, although he claimed at his trial in 1990 he was a prize asset that cost the CIA millions.

Throughout the 1970s, he shook off accusations that he was orchestrating the disappearances of Panamanian opposition figures.

After Torrijos’s mysterious death in a plane crash in 1981, the new military ruler, Ruben Dario Paredes del Rio,  consolidated Noreiga’s power-base by promoting him as the head of the security services.

Within a short time, power had effectively concentrated in Noriega’s hands. In 1983, he succeeded Paredes as the de-facto military ruler.

During the Reagan presidency in the 1980s, the US began relying heavily on Noreiga as an ally against Fidel Castro’s Cuba.

In 1987, a former chief-of-staff who had worked under Noriega, accused his fromer boss of corruption and electoral fraud, as well as being behind the plane crash in which Torrijos died.

In December 1989, US President George Bush ordered a US marine invasion to topple Noriega, who had become a liability and an embarrassment to US interests.

One US tactic to flush him out was to play deafening music non-stop outside the building. Noriega finally surrendered on January 3, 1990.

Noriega was flown to the US, with prisoner-of-war status, to face charges of drug trafficking, money laundering and racketeering.

In 2007, Noriega completed his 17 years of confinement in a Miami federal jail, but he was not a free man.

In 1999, Noriega had been convicted in absentia in a French court of spending $3m earned through drug sales to buy property. In March 2010, Noriega was extradited to France to face a new trial for money laundering.

Noriega was found guilty and sentenced to seven years.

Last month, a French court approved a request from Panama to extradite Noriega to serve out sentences he was given in absentia over murder, corruption and embezzlement. 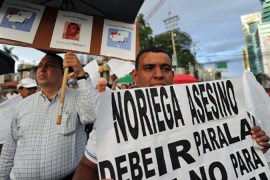 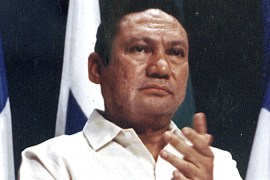 Former military leader expected to be re-tried on charges that he ordered killings of political rivals. 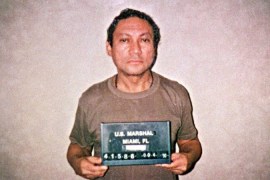