Silvio Berlusconi is to face a crucial vote in the Italian parliament this afternoon as lawmakers vote on whether or not to pass an austerity budget.

Berlusconi has denied reports that he would resign if the measure did not pass during Tuesday’s vote, but the opposition says that regardless of the outcome they will push for the prime minister to face a vote of confidence.

In a comment posted on his Facebook page on Monday, Berlusconi said rumours reported in the Italian media that he was close to quitting were “baseless”.

Two journalists close to Berlusconi earlier said they believed he would resign within hours, with his centre-right coalition on the verge of collapse before a crucial public-finance vote on Tuesday.

Facing a revolt by both his coalition supporters and some within his own party on a bill on which he has already been defeated once, Berlusconi spent much of the weekend scrambling to re-assemble a functioning parliamentary majority.

“That Silvio Berlusconi is about to step down is now clear to everybody, it’s a matter of hours, some say minutes,” Giuliano Ferrara, the editor of the Il Foglio daily, said in a video posted on the newspaper’s website.

Another journalist for centre-right daily Libero, Franco Bechis, also said on Twitter that Berlusconi was about to resign.

Al Jazeera’s Claudio Lavanga, reporting from Rome, said: “It’s starting to look like the last days of Caesar here in Rome, with many members of Berlusconi’s coalition saying that they are ready to turn their back and inflict that fatal blow in Tuesday’s vote.”

“We need a political change,” opposition MP Andrea Sarubbi told Al Jazeera. “We’re not talking about the centre-left going to the government. They won the elections, they have the right to govern Italy. But they cannot defend Berlusconi anymore. They have to find another name, another person willing to be the [head] of our government.”

The reports of Berlusconi’s imminent demise came as Italy remained embroiled in the eurozone debt crisis. Benchmark government bond yields – the rate at which governments can borrow money – rose on Tuesday to 6.73 per cent, the highest it has been since the euro was established in 1999.

Many analysts say yields above seven per cent would make funding costs unsustainable for Italy’s huge public debt, one of the highest in the world. Greece, Ireland and Portugal were all forced to take bailouts after their bond yields broke past the seven per cent barrier.

Italy has the third biggest economy in the eurozone and its political turmoil and debt worries are seen as a huge threat in the wider crisis facing the continent’s single currency.

The surging bond yield is accompanied by a low growth rate and debt of $2.6 trillion.

The vote is due on Tuesday afternoon, and if the bill is defeated, it will probably result in either Berlusconi’s immediate resignation or the calling of a vote of confidence which he is likely to lose.

In addition, Italy’s centre-left opposition said it was preparing a no-confidence motion in Berlusconi. It may abstain in the pending vote to expose Berlusconi’s lack of support without blocking an essential measure.

Apart from offering wavering deputies government jobs, Berlusconi is branding rebels as traitors to Italy at a moment of crisis and saying that if he falls the country must go to early elections, something many ruling deputies do not want.

Giulo Tremonti, the Italian finance minister, meanwhile, quit EU talks in Brussels on Tuesday to make his way to Rome for the crucial vote.

European finance ministers are meeting in Brussels to discuss a controversial proposal for a tax on financial transactions as well as recapitalising some of the continent’s troubled banks.

Ollie Rehn, the EU’s economic affairs commissioner, said on Monday that he expected immediate answers from Italy on its reform plans, and a first group of EU monitoring experts is due in the country on Wednesday at the latest.

“Italy knows that given the size of the country, it can’t hope to get help from outside,” Maria Fekter, the Austrian finance minister, said in Brussels before Tuesday’s talks.

“That’s why these huge efforts are made in Italy at the moment.”

There is “immense pressure, especially from the international economic community for Italy to get things in order”, journalist Patrizio Nissirio told Al Jazeera on Tuesday.

In Brussels, Al Jazeera’s Nadim Baba reported that eurozone finance ministers were quick to make a distinction between the situations in Italy and Greece, another debt crisis hit country.

“Behind the scenes, [the ministers] are urging people to take a different attitude to Italy [as compared to Greece]. On Monday night, in fact, Jean-Claude Juncker, the Luxembourg prime minister who also presides over the Eurogroup said that ‘Italy is no Greece’,” he said.

“[Juncker] has stressed that what officials here are looking at is implementation of what Italy has already committed to of its own back. But at the same time, they’re reminding us that they’ve started this very week to send monitors to Italy to make sure that the government does push through its planned austerity measures, and the IMF is going to be going there every three months.” 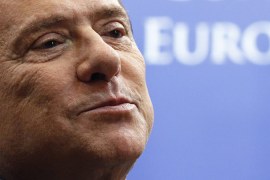 Italian 10-year bond yields have hit a new euro-era high of 6.67 per cent, on fears over mounting political uncertainty. 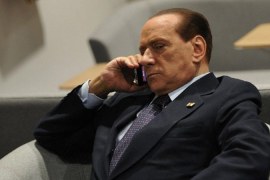 Tens of thousands of demonstrators gather in Rome for rally organised by the main left-wing party. 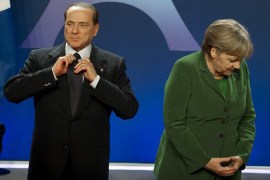 Italy agrees to be put under “surveillance” as part of plan to restore trust in its economy, senior EU sources say.