Syria’s foreign minister has attacked the Arab League, saying the organisation is being used as a “tool” to take the Syrian crisis to the UN Security Council.

Walid al-Muallem was speaking in Damascus on Sunday shortly after the Arab League rejected Syria’s proposed amendments to a peace plan to end the country’s turmoil, saying the changes put forward by Damascus alter the plan’s “essence”.

Al-Muallem said the proposed Arab League mission gave excessive authority to the observers and violated Syria’s sovereignty but denied that Damascus had sought to restrict the observers’ movement within Syria.

The minister said Syria will send a reply to the Arab League secretary-general asking for clarifications on why the proposed amendments were rejected.

Al Jazeera’s Nisreen El-Shamayleh, reporting from Amman, said; “Al-Muallem gave members of the media a timeline as to how the violence and tensions had grown since the country had agreed to an Arab League plan for a way out the strife that had engulfed the country for the last eight months.”

“He was at pains to point out why and how the League had gone beyond its mandate and defended the role of the national government in ensuring its security.“

The League wants to send a 500-strong mission of monitors to Syria to assess the situation there and had given Damascus three days from a meeting on November 16 to abide by an Arab plan aimed at ending the violence and starting talks between the government and opposition.

Arab League foreign ministers will meet again on Thursday to discuss Syria, MENA reported. It quoted an official at the Cairo-based body saying the committee handling the Syrian file, which includes Egypt, Sudan, Algeria and Qatar, would meet a day earlier to prepare for the ministerial meeting.

Meanwhile, witnesses reported a loud explosion on Baghdad Street in the centre of the city early on Sunday.

Activists from the Local Co-ordination Committees told The Associated Press news agency that several rocket-propelled grenades had been fired at the Baath Party building.

A witness told the Reuters news agency that the attack had occurred just before dawn when the building was mostly empty.

“Security police blocked off the square where the Baath’s Damascus branch is located. But I saw smoke rising from the building and fire trucks around it,” the unnamed witness said.

Thabet Salem, a journalist who lives a kilometre away from the party building, told Al Jazeera, “This is a clear-cut escalation of what’s going on … It will bring us into a dangerous phase.”

Syria ‘will not bow down’

If confirmed, the attack would appear to be the most serious attack in the centre of the capital since protests against Syrian President Bashar al-Assad began in March.

The self-styled Free Syrian Army mostly consists of army defectors who have taken up arms against state security forces. Last week they claimed responsibility for an attack on an air force intelligence base on the outskirts of Damascus.

Al Jazeera’s Nisreen El Shamayleh, reporting from Amman, said the targeted Baath office is located in the Mazraa district, an area of the capital “supposed to be safe and secure, where Assad enjoys a lot of support”.

Our correspondent also said the Free Syrian Army had claimed responsibility for an earlier attack that killed 22 people at a government checkpoint in the Mesraba area of Douma in the Reef Dimashq governate.

Al Jazeera cannot verify reports from Syria because of media restrictions imposed by the government.

In an interview with a British newspaper, Assad said that his government would continue to take action against opposition protesters and would not bow to mounting international pressure to end the crackdown that has left thousands dead.

“I assure you that Syria will not bow down and that it will continue to resist the pressure being imposed on it.”

Assad again repeated his assertion that any international military action taken against Syria would create an “earthquake” across the Middle East.

“If they are logical, rational and realistic, they shouldn’t do it because the repercussions are very dire. Military intervention will destabilise the region as a whole, and all countries will be affected,” he said.

Asked if his own forces had been too aggressive in cracking down on protesters, Assad said mistakes had been made but those were the fault of individuals, not the state.

Assad also said there would be elections in February or March when Syrians would vote for a parliament to create a new constitution, and that would include provision for a presidential ballot.

“That constitution will set the basis of how to elect a president, if they need a president or don’t need him,” he said. “They have the elections, they can participate in it. The ballot boxes will decide who should be president.”

Damascus is becoming increasingly isolated over its assault on protesters, which the United Nations says has killed at least 3,500 people. Assad said the civilian death toll was 619 and that 800 government forces had been killed.

“My role as president – this is my daily obsession now – is to know how to stop this bloodshed caused by armed terrorist acts that are hitting some areas,” he said.

“The only way is to search for the armed people, chase the armed gangs, prevent the entry of arms and weapons from
neighbouring countries, prevent sabotage and enforce law and order.” 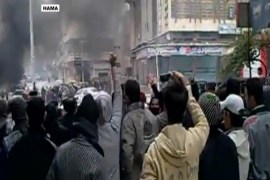 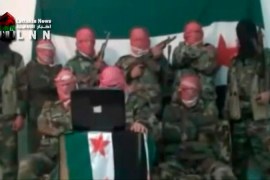