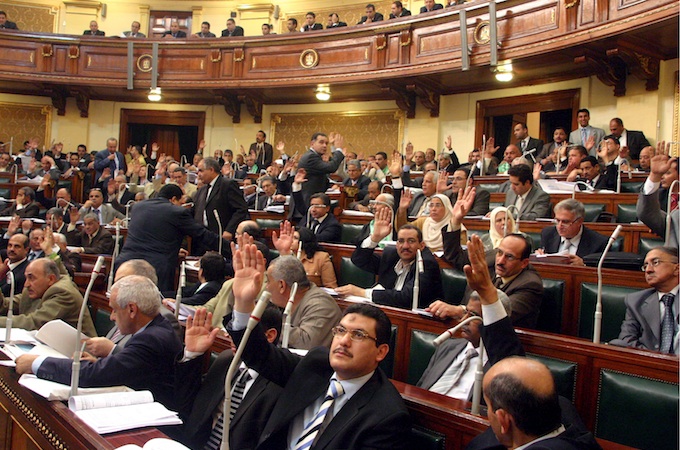 The 498 members of the People’s Assembly, all but ten of them elected by the public, will serve 5-year terms [EPA]

Since February 11, when President Hosni Mubarak stepped down and handed power to the Supreme Council of the Armed Forces (SCAF), the People’s Assembly has ceased to exist, replaced by a semi-autonomous cabinet and prime minister who are chosen by and answerable to the military leadership.

Under an interim constitution drafted by a military-selected committee and approved by national referendum in March, a new People’s Assembly will resume its duties following the end of a three-stage election early in 2012.

But military rule casts a shadow over the its future responsibilities: The constitution gives the People’s Assembly the power to legislate and “oversee the work of the executive branch,” but the SCAF holds overlapping authority to make and object to legislation, issue public policy, convene and adjourn parliament, and appoint and dismiss the prime minister and cabinet.

Not until Egypt elects a president and dismisses the SCAF will the true nature of the post-revolution People’s Assembly be known.

Modern parliamentary life in Egypt began in 1924, two years after Britain granted limited independence to its former protectorate. Though the country remained a constitutional monarchy, with King Fuad I holding the power to dissolve parliament, a new constitution drafted by a special committee provided for a bicameral legislature and enshrined the separation of powers.

Egypt held 10 elections for the Chamber of Deputies, the precursor to the People’s Assembly, between 1924 and 1950. The Wafd Party, originally founded by famed politician Saad Zaghloul, dominated most of the votes. Though the elections were considered free, they delivered a parliament of upper-class landowners and businessmen.

The peaceful 1952 Free Officers coup against King Farouk, Fuad’s successor, signalled the end of truly democratic politics in Egypt. Gamel Abdel Nasser and his Revolutionary Command Council declared the the country a republic but outlawed parties. Nasser was elected president in 1956 and established the country’s sole parliamentary organ, the National Union, in 1957.

Mubarak’s ruling National Democratic Party (NDP), a direct descendant of the National Union, was founded in 1976, never won less than two-thirds of parliament and dominated nearly all facets of Egyptian life.

Role of the assembly

The Mubarak regime allowed a semblance of free and fair multi-party elections in 2005, enabling the Muslim Brotherhood to win an unprecedented 88 seats, but the autocratic style of the Egyptian republic did not change. The NDP’s grip on parliament and its complete disinterest in accommodating opposition views, especially those of an Islamist party like the Brotherhood, made proposing legislation a futile attempt.

The new People’s Assembly may feature many familiar names – the Brotherhood and, to a lesser extent, the remnants of the NDP both look set to win a significant number of seats. But the larger NDP apparatus that controlled all of the committees and ministries during Mubarak’s rule will no longer exist, and a diverse array of voices, from neo-liberals to strict Salafis, will now have a say in policy.

But the extent of their power will depend on the military and Egypt’s yet-to-be-decided executive branch.

The interim constitution describes the role of the People’s Assembly as such:

Immediately upon election, the People’s Assembly Council will assume the authority to legislate and determine the public policy of the state, the general plan for economic and social development, and the public budget of the state. It will also oversee the work of the executive branch.

The 498 members of the assembly will serve for five years. Another parliamentary body, the senate-like Shura Council, will be elected in 2012, after the make-up of the assembly is decided. Its members, one-third of whom will be appointed by the future president, will serve for six years and have the vague responsibility of “general planning for economic and social development” and recommending how the parliament should implement laws suggested by the president, particularly regarding foreign affairs.

Crucially, the People’s Assembly will also be able to oversee the president’s ability to institute emergency law, a draconian set of rules (in place from the death of President Anwar Sadat to the present) that restrict freedom of opinion and enable vast police powers. A majority of the assembly must approve the use of emergency law within seven days of its implementation.

The People’s Assembly will also help choose the 100-member council that will draft Egypt’s permanent, post-revolution constitution, though that job will also be constrained by the military, which at the moment controversially supports the creation of a “supraconstitutional” document that will lay out the principles of the constitution before any elected representatives have their say.