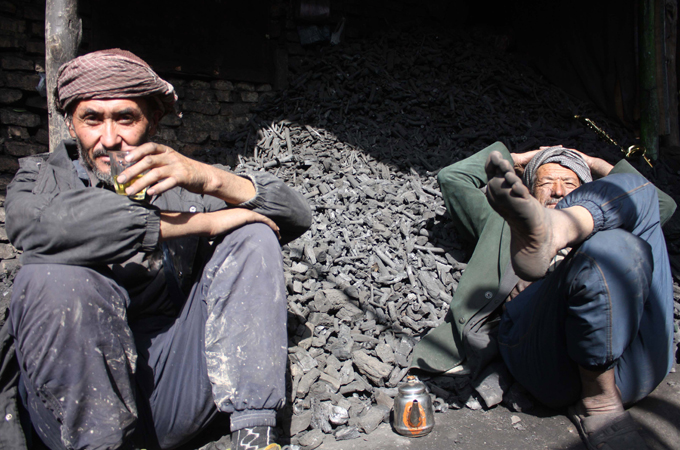 The poll found good support for the government, despite 35 per cent of Afghans saying their country is going in the wrong direction [EPA]

A US-funded survey in Afghanistan says that 73 per cent of the population is satisfied with the government’s performance, a claim which leaders and analysts have disputed as being far from reality.

Positive reponse to the performance of provincial governments is reported even higher, at 80 per cent.

Parliamentarians, officials and analysts told Al Jazeera that the generally positive findings do not reflect realities on the ground.

Despite progress in certain areas, such as education and healthcare, President Hamid Karzai’s government continues to be marred by corruption and insecurity, among other problems. A messy dispute over a parliamentary election rife with fraud also continues to stall legislation, a year after the vote.

Even government officials were surprised by the survey’s figures.

“This is bigger than a white lie,” said Ramazan Bashardost, a member of parliament and former presidential candidate from Kabul. “Even Karzai himself is not happy with his government, and the poor guy often complains to the media about the problems.”

“It [the survey] seems part of the illusion-weaving to get out of here, but reports like this are actually dangerous for us, and for the US security interests.”

The survey, which cost about $300,000, was funded by a grant from the US Agency for International Development (USAID), and has a large audience of policymakers in the Afghan government and the international community.

It comes as Afghanistan prepares for a second round of security “handovers”, in which Afghans take over responsibilities from foreign forces ahead of the 2014 withdrawal date of international troops.

President Karzai is expected to announce that 17 provinces will be transitioned. Seven areas completed the process in the first round, in July.

Some, like Kandahar MP Abdul Rahim Ayoubi, say the lack of a better alternative could be a factor in the high positive response to the government. Over the past couple of decades, Afghans have seen a worsening trend, they fear for the worst, he said.

“If they are discontent with the government, what option do they have? What can they do? People approve of the government because they don’t see an alternative.

“The opposition groups that keep announcing themselves every day are people who have been tested many times before. In them, people don’t see a solution to their problems, people actually fear the worse”.

Shaharzad Akbar, a partner with QARA Constulting, an Afghan public affairs firm, said the poll’s high figures could be a result of who was picked for the interviews, and how the questions were framed. Her firm has worked extensively in gauging public opinion for government and non-government clients.

“If you are conducting surveys in mostly secure areas, it creates a national bias that needs to be factored into the final numbers, otherwise the accuracy is in question,” she said.

Random sampling, the method employed by the survey, is also tricky in places like Afghanistan, she said. The country lacks the population data – both at local and national level – that planners need in order to make sure the different demographics are reflected in the samplings.

But Dr Bruce Tolentino, the Asia Foundation’s country representative in Afghanistan, said the survey was held to rigorous standards of research. “The opinions of those living in highly insecure areas are likely to be underrepresented in survey findings,” he said.

“In those provinces where security was a challenge, to obtain a representative sample, alternative sampling points were selected in the same provinces to adjust for insecurity and logistical difficulties.”

But the survey’s findings also seem at odds with an internal study recently conducted by the Afghan government over concerns that poor governance could be fuelling discontent and armed resistance.

“Corruption, violation of laws, and our government’s inability in implementing the law across the country are all shortcomings that undoubtedly cause discontent,” Rangin Dadfar Spanta, Karzai’s national security adviser, said in October after the study was completed.

Last week, a Gallup poll showed that the percentage of those “suffering” had increased to 30 per cent in Afghanistan, up by seven per cent from the previous year.

“In our desire for success, preferably, I would hope that the Asia foundation is correct,” Shaida Mohammad Abdali, the deputy national security adviser, told Al Jazeera. “Often hearing more of setbacks than progress from such surveys, I was taken by surprise, though in a positive sense that there is so much optimistic view of people with regard to government performance.”

The study also said there is strong public support, 82 per cent, for efforts to make peace with the Taliban; sympathy for the armed group was down to a record low of 29 per cent, from 40 per cent in 2010.

President Karzai’s efforts to talk to the Taliban have been stalled after a string of high profile attacks, most notably the assassination of his chief negotiator, former president Burhanuddin Rabbani.

Karzai has since said that talks with Taliban led nowhere, and that he is forced to negotiate with Pakistan instead, which has been accused by the US and Afghanistan of supporting the Taliban and allowing them to maintain sanctuaries.

“It is important to know how the questions were framed to the interviewees,” Akbar said. “If you ask anyone in the country: do you support peace? Of course they will say yes. But if you approach the issue from many angles, and ask them about what is on the line in the current government peace plan and how it might affect his locality, you might get a different answer.”

Abdali, the deputy national security adviser, said this figure was not surprising.

As patience with the 10-year war runs out in the US, critics say the survey is likely to feed into a narrative of transition: US lawmakers can use the findings it as evidence that it is time for them to leave Afghanistan.

“Like many such social scientific tools, the survey produces a clinical picture, with numbers supposedly capturing an objective reality,” said Robert Crews, a professor of history at Stanford University who has written extensively on Afghanistan.

He said politicians can readily cite such statistics as concrete “evidence”.

Abdul Waheed Wafa, executive director of the Afghanistan Centre at Kabul University, disagreed that a glowing survey like this could help the Obama administration with its “Afghanistan problem” ahead of the US presidential elections.

“The picture that exists of Afghanistan in the US collective imagination is a dark one, of utter failure. A survey like this could be a positive, rallying element in the larger transition narrative. But I doubt things like this will help Obama change the US public perception of Afghanistan heading into the election.”

The skepticism towards the report is perhaps best described by one Afghan, who spoke to Al Jazeera: “If you tell an ordinary citizen where the funding for the survey came from, and then ask them whether the 73 per cent approval of government makes sense to them, they will tell you right away its part of the US narrative to pack up and get out here.”