But Turkey’s Kandilli Observatory estimated that 500 to 1,000 people could have perished in Van province on Sunday.

The seismology institute’s estimate was based on the strength of the quake and the structure of the housing in the area.

The worst damage was caused to the town of Ercis, close to the Iranian border. The city of Van also suffered substantial damage.

Atalay said authorities had no information yet on remote villages, but a local governor was touring the region by helicopter to assess damage.

TRT said 59 people had been killed and 150 others injured in Ercis, while 25 others died in Van. Another person died in the nearby province of Bitlis.

The quake’s epicentre was in the village of Tabanli.

Al Jazeera’s Murat Utku, reporting from Van, said rescue workers were are scrambling to rescue those trapped before nightfall.

“The heat difference between day and night is very big here”, he said. “Some are trying to dig their family members out by hand, but some machines are being taken here now to join the rescue workers.”

The temperature was expected to dip to three degrees Celsius during the night.

At least 50 people were taken to hospital in Van, Anatolia news agency said.

“There are so many dead. Several buildings have collapsed. There is too much destruction,” Zulfikar Arapoglu, the mayor of Ercis, told NTV television. “We need urgent aid. We need medics.”

The Turkish Red Crescent said its rescuers pulled several injured people out of the collapsed dormitory in Ercis, which sits on a geological fault line. It said it was sending tents, blankets and food to the region.

Serious damage and casualties were also reported in the district of Celebibag, near Ercis.

“There are many people under the rubble,” Veysel Keser, mayor of Celebibag, told NTV. “People are in agony, we can hear their screams for help. We need urgent help.”

Officials warned that they were struggling to assess the full extent of the damage.

Aftershocks continued after the initial quake.

Six helicopters as well as military cargo planes were sent to the area carrying tents, food and medicine and Prime Minister Recep Tayyip Erdogan was travelling to Van.

Israel offered “any aid” Turkey might need shortly after the quake struck, despite tensions between the formerly close allies.

The European Union expressed its condolences to Turkey and NATO offered assistance.

The quake was also felt over the border in northwest Iran, causing some panic in major cities, Iranian media reported.

Two people were killed and 79 injured in May when an earthquake shook Simav in northwest Turkey. 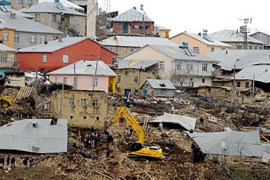 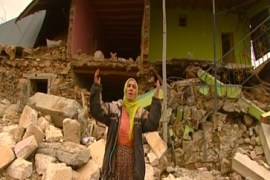 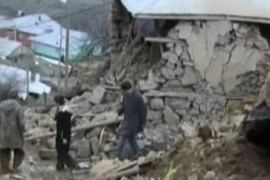