Electoral officials have begun counting the ballots in Liberia after polls closed in the country’s second elections since the end of a brutal civil war in 2003.

Observers said on Wednesday that voting took place without incident for the presidential, senatorial and legislative elections, with UN peacekeepers and police deployed around polling stations across the West African country .

Thousands had queued in the rain to vote in Tuesday’s elections, seen as mostly as a close race between Ellen Johnson Sirleaf, the incumbent president and a Nobel peace laureate, against a former UN diplomat, Winston Tubman.

Al Jazeera’s correspondent Yvonne Ndege, reporting from the capital, Monrovia, said that there had been no reports of disorganisation or violence.

The election is being held as Liberia stands to gain billions of dollars in foreign investment in its mining sector and potentially emerge as a premier oil nation.

Passions have run high in a contest that some forecast will go to a second-round runoff between Johnson Sirleaf and Tubman, and many voters recall how a dispute over the outcome of the 2005 election led to days of rioting in Monrovia.

“Though it is too early to predict the results of this election, opposition parties are adamant that they will win this election,” our correspondent said.

“President Sirleaf told me earlier today that she would accept the will of the Liberian people if she had to lose this election.”

Sirleaf may have won the Nobel, but that may not be enough to persuade voters to re-elect her.

The 72-year-old Harvard University-educated leader suffers from a rare paradox: Her star has continued to rise internationally, even as her popularity at home has waned over claims that she has done too little to alleviate the nation’s crushing poverty.

“One out of every three Liberians cannot feed themselves. They live in abject poverty. And they couldn’t care less about the Nobel Prize,” Charles Brumskine, one of 15 opposition candidates facing Sirleaf, said.

Eight years after civil war ended with the ouster of accused war criminal and former Liberian leader Charles Taylor, the country has seen growing investment in its iron and gold mines.

Sirleaf’s achievements include getting $5bn of the country’s international debt wiped clean and allowing Liberia to establish a sovereign credit rating, a precondition for issuing bonds.

Her government has built clinics, schools and roads, though her critics say she has built too few. And despite the deep wounds inflicted by the civil war, she is credited with maintaining peace.

Still, unemployment is around 80 per cent, and residents complain of a lack of basic services, high food prices, rampant crime and corruption. The average income stands at $300 a year – below the $1-a-day benchmark for extreme poverty.

Campaigning for the election has been mostly calm, though scuffles erupted between rival supporters in Monrovia during final rallies at the weekend.

Sirleaf became Africa’s first freely elected female head of state in the 2005 election that was organised by the United Nations. She defeated football sensation George Weah, who came in second and who lost the race in part because of his lack of formal education.

Weah, a former world footballer of the year, is again her main contender. However, in a move intended to silence critics he has agreed to run as the No. 2 on a ticket alongside presidential candidate Winston Tubman, who like Sirleaf was educated at Harvard.

Tubman told the Reuters news agency on Saturday he was certain he would win and issued a veiled warning that his supporters could make it “difficult to govern” for anyone else.

“We have expressed some concerns about innuendos about violence, encouraging people not to support the results of the election,” US Ambassador Linda Thomas-Greenfield told Reuters.

The UN said the return of homegrown mercenaries from a four-month civil war in Ivory Coast this year could be a threat. Several weapons caches have been seized, but there has been no evidence of plans to disrupt voting. 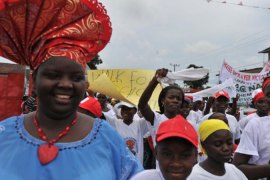 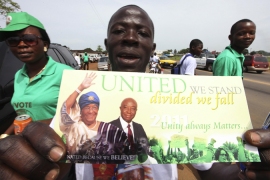 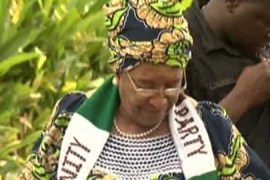 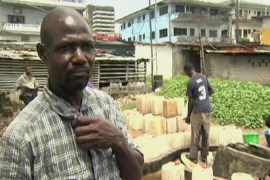