A second wave of rioting has rocked Algeria, where hundreds of protesters have fought running battles with riot police in the capital, Algiers.

The violent protests come after growing anger among citizens about the rising cost of living and the lack of jobs.

Al Jazeera’s Hashem Ahelbarra reports on the violence, which comes after similar protests in neighbouring Tunisia. 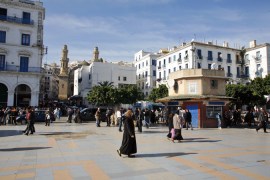