A leading Ugandan gay rights activist has been murdered at his home just months after his photograph, and those of several other people said to be gay, were printed by a newspaper which called for them to be killed.

David Kato, 43, died on Wednesday after a man entered his home in the capital Kampala and struck him on the head before fleeing, his lawyer John Francis Onyango said on Thursday.

Kato was pictured and named by the anti-gay tabloid Rolling Stone – no relation to the US magazine of the same name – that also ran a story late last year calling on readers to “hang” gay rights advocates.

Homosexuality is banned in Uganda, which is mulling a harsh new anti-gay bill that would usher in the death sentence for acts of “aggravated homosexuality”.

Police were focusing on two potential suspects, the lawyer said.

Police could not say if the murder was linked to Kato being a gay activist.

“It’s too early for me to make a conclusion on that. What we are investigating is the murder,” Vincent Ssekate, a deputy police spokesman, told the AFP news agency.

Human Rights Watch (HRW) said in a statement that Kato died on his way to hospital. The New York-based rights group called on police to “urgently and impartially investigate the killing”.

“The government should ensure that members of Uganda’s Lesbian, Gay, Bi-sexual and Transgender community have adequate protection from violence and take prompt action against all threats or hate speech likely to incite violence,” it said.

Another article carried the headline “Hang Them”, in reference to gay rights campaigners.

Kato and two others successfully sued the newspaper for damages and secured a high court injunction blocking all media from outing gays.

He was also a vocal critic of the Anti-Homosexuality Bill which, if enacted, would massively expand the list of prosecutable offences related to being gay and allow capital punishment for “aggravated homosexuality”.

The category includes any act involving a minor or a person who knows he is HIV positive and also encompasses “repeat offenders”.

The country’s penal code already bans “carnal knowledge of any person against the order of nature”, as do those of many African countries.

An attempt to commit a homosexual act can be punishable by seven years in jail in Uganda. A conviction for actually committing such an act carries a life sentence.

Few countries in the region, however, have tried to push through legislation as repressive as the bill Uganda wants to enact.

Many activists say the call for tougher anti-gay measures in Uganda has been influenced by homophobic evangelical pastors from the US.

Maria Burnett, a HRW Uganda researcher, said the bill, which has not yet been debated in parliament, should be withdrawn.

“President Yoweri Museveni should categorically reject the hate that lies behind this bill, and instead encourage tolerance of divergent views of sexuality and protect vulnerable minorities,” she said.

Other Ugandan tabloids have over the past several years sporadically published similar articles listing the name and picture, and in some cases the place of residence, of homosexuals. 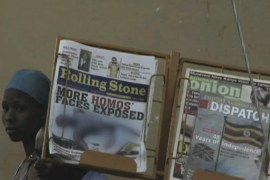 Judge orders paper to stop printing photos of gay people after they are attacked.