At the Bourj el Barajneh refugee camp in southern Beirut, a centre for the elderly serves as an oasis from the overcrowded, filthy conditions outside its metal doors.

On a recent Thursday morning, a group of men and women in their 60s and 70s gathered around a table to colour and draw pictures, while others solved crossword puzzles. One woman sitting in the corner focused intently as she embroidered a traditional Palestinian dress. The Active Ageing House in the refugee camp is a place where they can pass time, socialise and share meals.

They are known as the “Children of the Nakba” – a generation of Palestinians that witnessed, and survived, the forced expulsion and violence in 1948 committed by Zionist paramilitaries on behalf of the nascent state of Israel.

They each have a story about how they or their parents managed to escape their homeland over 60 years ago – and their wounds are still raw.

Some six million Palestinian refugees are scattered around the world, including more than 400,000 in Lebanon. Here, they are deprived of basic rights, not permitted to buy or sell property, and are banned from more than 70 job categories. Mired in abject poverty, they are dependent on an increasingly incapable United Nations agency for aid.

A “symbolic number” of returnees

The Palestine Papers show that Palestinian Authority (PA) negotiators were prepared to make major concessions on the refugees’ right of return: on the numbers potentially allowed to return to their homes in what is now Israel; on whether refugees would be able to vote on any peace agreement; and on how many would be able to settle in a future Palestinian state.

Children of the Nakba

Kamel Shraydeh, a 76-year-old retired teacher living in Bourj el-Barajneh, was born in the Palestinian village of Safsaf, a few kilometers from the northern city of Safed in present-day Israel. In October 1948, dozens of villagers, including ten members of the Shraydeh family, were massacred by Israeli soldiers. Shraydeh was 13 years old at the time, but he was tall and looked older than his age. Israeli soldiers, he said, were seizing, and in some cases executing, boys as young as 14 and 15. His parents, fearing for his life, cut off the bottom of his pants so he would appear shorter and younger.

In an email Ziyad Clot, a legal adviser to Palestinian negotiators on the refugee file, writes, “President [Mahmoud] Abbas offered an extremely low proposal for the number of returnees to Israel a few weeks only after the start of the process.”

The papers also reveal that then-Israeli Prime Minister Ehud Olmert proposed that 1,000 Palestinian refugees be allowed to return annually to Israel over a period of five years – totalling just 5,000, a tiny fraction of those displaced after Israel’s creation.

On January 15, 2010, Erekat told US diplomat David Hale that the Palestinians offered Israel the return of “a symbolic number” of refugees.

According to the documents, not only did Palestinian officials offer a low figure of returnees, the chief negotiator of the PLO, Saeb Erekat, said that refugees would not have voting rights on a possible peace deal with Israel.

Notes of a meeting on March 23, 2007 , between Erekat and then-Belgian foreign minister Karel De Gucht, reveal that Erekat said, “I never said the Diaspora will vote. It’s not going to happen. The referendum will be for Palestinians in Gaza, the West Bank and East Jerusalem. Can’t do it in Lebanon. Can’t do it in Jordan.”

While Erekat conceded the rights of Palestinian refugees to determine their own fate, during such meetings Israeli negotiators made clear their vision for the refugees.

In a negotiation meeting on January 27, 2008 , then-Israeli Foreign Minister Tzipi Livni, told her Palestinian counterparts, “Your state will be the answer to all Palestinians including refugees. Putting an end to claims means fulfilling national rights for all.”

Erekat seemed to buy into this idea. In a meeting with US diplomats, including Special Envoy to the Middle East, George Mitchell, on October 21, 2009, Erekat said, “Palestinians will need to know that five million refugees will not go back. The number will be agreed as one of the options. Also the number returning to their own state will depend on annual absorption capacity”.

So even a future Palestinian state could not accommodate the millions of displaced who would want to settle there.

Al Jazeera spoke with three dozen refugees in the Burj al-Barajneh camp, from ages 16 to 88, and they all expressed the same sentiment: They want to return to their native homeland, and to have a say in any final settlement between the Palestine Liberation Organisation (PLO) and Israel.

Shafiqa Shalan, 60, who was born in Burj al-Barjnah, said she would not agree to being settled in Palestine. “What’s the difference?” she said. “We’re refugees in Lebanon and we would be refugees in the West Bank. So we might as well stay here. I would not consider it my home. My homeland is the village where my parents were expelled.”

That sentiment was echoed among younger residents of the camp. Ruwaida Al-Daher, 47, who was also born in Bourj el Barajneh, said, “We ask for the right of return because he who has no country has no dignity. We live like dogs here. But I would still oppose going to the West Bank or Gaza. Why would I go back to any place but my hometown?”

Al-Daher said she would not want to become a Lebanese citizen if that were offered to her under any peace deal – and that Palestinian negotiators had no mandate to make concessions on her behalf.

“The right of return is a personal right. It’s sacred,” she said. “No one can cancel it or take it away.”

Hussam Assairy, a 22-year-old who works as a mechanic in the camp, said he would move to his grandparents’ hometown of Haifa if given the chance. 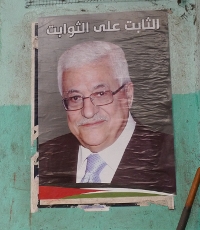 A sign in the camp proclaims Abbas as “firm on principles.”

|I would rather live in the camp,” he said, “than to become a Lebanese citizen and give up my Palestinian nationality”. As for voting on any future deal, he said, “Every Palestinian should be able to vote. Palestine is not just for those living there. It’s ours too”.

“It’s ours more than there’s,” Sara Ghannoum, 20, interjected. “They’re able to live there, while we’re deprived of that.”

For the refugees at Bourj el Barajneh, returning to their hometowns is the only conceivable option.

“I am willing to walk to Palestine, to my country,” says 76-year-old Kamel Shraydeh. “I think about this day and night, because as the saying goes, ‘The one who walks in a strange land gets lost.’” All these decades later, Lebanon remains a foreign place he cannot call home.

Despite these dreams, many have resigned themselves to a life spent in the camps. Over breakfast at the elderly center, a group of women reflected on their decades in Bourj el Barajneh.

“We were born here and we grew old here,” said Asiya al-Ali, 65. “And we’re going to die here,” Sha’alan added with resignation.

Even so, throughout the camp, refugees cling to hope that someday their situation will change – and there are signs that they place that hope in their leadership, which has shown that it’s willing to compromise the right of return.

Filling them with hope are posters on the crumbling walls bearing the image of a smiling PA President Mahmoud Abbas, and the words: “Firm on Principles”.