Further catastrophic landslides are feared in Brazil after forecasters warned of several more days of wet weather in an area where some 626 people were killed when muddy waters tore through their homes earlier in the week.

As rescue teams and residents combed the wreckage of hillside communities near the city of Rio de Janiero, forecasters said that the rain in the mountainous Serrana region could continue until Wednesday.

“We are predicting a light but steady rain, which is not good because it could lay the conditions for more landslides,” Luiz Cavalcanti, the head of the national weather institute, said on Friday.

He said such conditions were particularly dangerous because there is nowhere for it to flow away and “it accumulates until the earth gives way under its weight and swallows up the hillside”.

Rivers of mud tore through towns in the region on Thursday, levelling houses, throwing cars atop buildings and leaving thousands of people seeking shelter.

The renewed rainfall threatened to further complicate efforts by rescue teams to reach survivors trapped in isolated areas. Groups of rescue workers made their way on foot as a difficult terrain and washed out roads prevented the use of vehicles.

“The rain did not stop at dawn and is continuing in the morning, which is making the rescue efforts more difficult,” Lieutenant Rubens Placido, a fireman in the hard-hit town of Nova Friburgo, said.

“The number of deaths is going to rise quite a bit. There are still a lot of people buried.”

Sergio Cabral, the governor of Rio state, repeated his call for residents to abandon their homes in the disaster zones and move to safer ground.

“The forecast of more rains is not reassuring,” he said.

Marise Ventura told the AFP news agency that said she and others had no choice but to leave Nova Friburgo, where at least 246 people had been killed.

“I’m going because there’s no electricity anywhere, no water, no food… So I’m going to a relative’s place,” she said.

Meanwhile, Al Jazeera’s Gabriel Elizondo, reporting from Teresopolis, one of the worst affected towns, said there had been reports of looting on Friday.

“The security situation is deteriorating,” he said.

“There are reports of looting; according to local officials here they are calling the city of Rio de Janeiro asking for more police officers to be sent here.”

At least 223 people are believed to have died in Teresopolis, where hundreds more are feared buried under the rubble of their homes after the equivalent of a month’s rain fell in less than 24 hours.

An abandoned building was being used as a morgue to house the hundreds of bodies being brought there.

The military said on Friday that it was sending 11 helicopters and 500 personnel to help approximately 800 rescuers from fire departments and the state civil defence agency. The army and navy also pledged heavy digging machinery, ambulances and generators.

Heavy rains, common during Brazil’s summer wet season, were intensified this week by a cold front which doubled the usual precipitation. 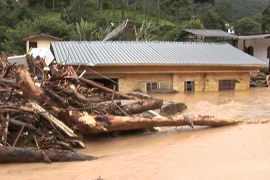 Country’s worst natural disaster in a decade leaves at least 500 people dead in the southeast. 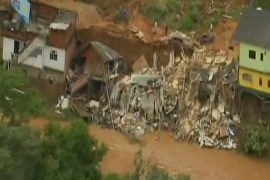 Death toll likely to rise in aftermath of floods and mudslides triggered by heavy rains. 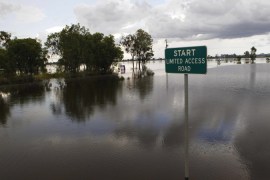