Saad al-Hariri, Lebanon’s caretaker prime minister, has vowed to work with Michel Sleiman, the president, on forming a new government after the Hezbollah movement forced the collapse of his coalition government.

“There is no alternative for all of us but dialogue, and no side in Lebanon will be able to eliminate the other,” al-Hariri said.

Al-Hariri returned to Beirut on Friday after talks in the United States, France and Turkey aimed at rallying support for his March 14 alliance.

Eleven ministers from the opposition March 8 alliance, led by the Shia Muslim Hezbollah, withdrew from the cabinet to bring down the government on Wednesday.

The ministers resigned primarily over disagreements arising from a UN tribunal investigating the 2005 assassination of Rafiq al-Hariri, the former Lebanese prime minister and Saad al-Hariri’s father. The Special Tribunal for Lebanon is reportedly close to indicting senior members of Hezbollah for the murder.

Al-Hariri held talks with Recep Tayyip Erdogan, the Turkish prime minister, in Ankara before flying home. The meeting followed separate talks with Barack Obama, the US president, in Washington, DC, and Nicolas Sarkozy, the French president, in Paris.

Michel Sleiman, Lebanon’s president, has asked al-Hariri to remain as caretaker prime minister until the country’s political crisis is resolved.

The March 8 alliance has said it will not accept al-Hariri, whose coalition won a 2009 legislative election and still controls a majority in parliament.

Meanwhile, the UN tribunal met on Friday to hear a former Lebanese general’s argument that he should be allowed to see the evidence that led to his arrest in 2005 after Rafiq al-Hariri’s assassination. Major General Jamil al-Sayyed, the country’s former chief of general security, was arrested as a suspect in the killing and held for nearly four years before being released.

Jamal Wakim, a professor at the Lebanese International University, told Al Jazeera that the crisis is “very serious, [as] for the first time since 2008 we have a big division in the country, we have no talks going on between the March 8 and March 14 groups”.

Wakim said that it was unlikely that the opposition would be able to form a government on its own, as it lacked the number of parliamentary seats required, but warned that violence could break out if the crisis continues.

“I think we are facing a big crisis in the country, and there is more yet to come,” he said.

“Violence might break out whenever we have political instability, and now we have a political confrontation between two opposing groups, and its most likely that it will happen.”

Rula Amin, Al Jazeera’s correspondent in Beirut, reported that al-Hariri’s allies “insist that he is their only candidate [for prime minister]”.

Al-Hariri’s alliance currently holds a majority in the Lebanese parliament, but Amin said possible dramatic changes in alliances could swing the majority the way of the opposition.

There has been growing political tension in Lebanon amid signs that Hezbollah members could be indicted by the UN tribunal.

Al-Hariri’s alliance, a predominantly Sunni-Christian political coalition, has the backing of Saudi Arabia and the West. The United States has pushed hard for the tribunal to be allowed to freely release its findings, and al-Hariri and his supporters have so far refused March 8 demands to renounce its impending results.

Hezbollah, which has denied any role in Rafiq al-Hariri’s assassination, has denounced the tribunal as an “Israeli project” and urged al-Hariri to reject any findings by the court.

Edward Bell, an analyst for the Middle East and North Africa at the Economist Intelligence Unit, told Al Jazeera that Lebanon is likely to enter a stage of several months without any government while negotiations on its formation are held.

“The external player with the best chance at diffusing the situation is Syria as it maintains contact with all parties, both inside and outside of Lebanon, and can apply pressure on Hezbollah to reach a consensus with other Lebanese parties,” Bell said.

Mohammed Raad, a Hezbollah MP, said that the party would nominate for the premiership a leader with “a history of resistance” when Sleiman attempts to start building a new government, but he stopped short of giving names.

Al-Hariri’s bloc is expected to rule out the nomination of anyone other than the outgoing prime minister.

“I do not see a government in the country without Saad al-Hariri,” Boutros Harb, a parliamentarian close to the prime minister, said. 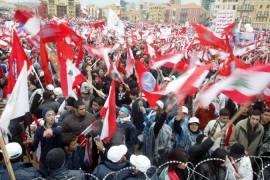 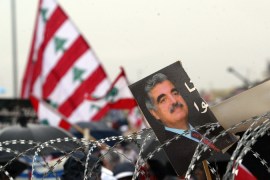