Egypt’s military ruler has postponed his court session in the trial of Hosni Mubarak, Egypt’s former president, with his lawyer citing the attack on Israel’s embassy in Cairo on Friday.

Field Marshal Hussein Tantawi, Mubarak’s one-time confidant, had been expected to offer highly anticipated testimony on Sunday about Mubarak’s alleged role in the killing of protesters in the uprising that toppled him in February.

Assem Qandil, a defence lawyer, said Tantawi was unable to testify because he was too busy dealing with the security issues after the Israeli embassy was attacked.

Qandil said the field marshal had offered to send written testimony, but “the judge refused and reissued a request for Tantawi to show up in court”.

Egyptian state television said Tantawi had now been ordered to give his testimony on September 24 or 25.

Tantawi, who was Mubarak’s defence minister during the uprising in January and February, is the leader of the military council which was handed power when Mubarak stepped down.

Omar Suleiman, the head of intelligence who was appointed vice-president during the protests, has also been ordered to testify in the trial.

Mubarak is charged with ordering the killing of anti-government protesters but denies the charges against him.

Nearly 900 people were killed in the unrest which lasted for 18 days.

The trial of Mubarak and his sons, Gamal and Alaa, has been merged with that of Habib el-Adly, the former interior minister, who also is accused of a role in ordering the killings.

In a separate case on Sunday, a group of Mubarak regime officials began trial on charges, including manslaughter, linked to the landmark February 2 “camel battle” when riders on horses and camels stormed into Cairo’s Tahrir Square, attacking protesters with whips and swords.

The incident touched off one of the most violent days of the uprising, with protesters and Mubarak loyalists fighting in Tahrir Square and adjacent streets with rocks, firebombs and slabs of concrete. 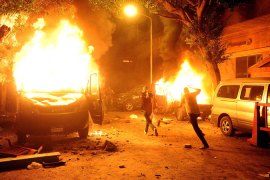 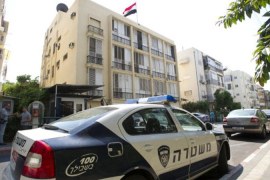 Security enhanced at the Israeli embassy in Cairo to prepare for a restoration of diplomatic relations. 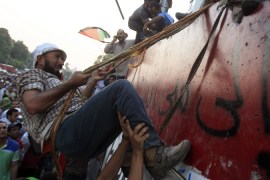 Rally in Cairo to press generals to keep their promises of political reform ends with attack on Israeli embassy. 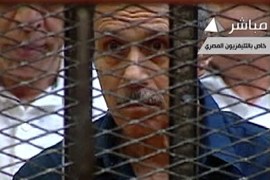