Ali Abdullah Saleh, Yemen’s president, has issued a directive ordering his security forces to protect demonstrators trying to end his 32-year rule, after at least 15 people have been killed in the country’s recent unrest.

The statement, relayed by the Yemeni press attaché in Washington on Thursday, said Saleh had “demanded security services to offer full protection for the demonstrators”.

“Late this evening [Wednesday] … Saleh instructed all security services to thwart all clashes and prevent direct confrontation between pro- and anti-government protesters,” it said.

“Furthermore, the government calls on protesters to remain vigilant and take all precautionary steps to prevent the infiltrations of individuals seeking to carry out violent actions.

“The government … will continue to protect the rights of its citizens to assemble peacefully and their right to freedom of expression,” the statement said.

Thousands of protesters were camping out for a fifth day in an impromptu tent city outside Sanaa University. Members of the university’s professors’ union also turned out to support  the demonstrators, who have one demand: that Saleh step down.

Fifteen people have been killed in unrest shaking Yemen since protests began on february 16. Saleh has said he will not give in to what he described as opponents advocating anarchy.

Pro-Saleh loyalists wielding clubs and daggers have often sought to break up opposition protests in the capital Sanaa and elsewhere.

Saleh has already made significant verbal concessions to the opposition, promising to step down when his term ends in 2013 and not to try to bequeath power to his son.

But opposition parties are suspicious of his calls for dialogue because of the violence used against protesters.

Eleven members of parliament have quit Saleh’s ruling party in protest at what they described as government violence against demonstrators, parliamentarians said on Wednesday.

About 80 per cent of legislators still back the president.

“The people must have the right to demonstrate peacefully,” Abdulaziz Jubari, one of the MPs that resigned, said.

A group of 28 legislators with Saleh’s General people’s Congress party, including those who have resigned, have sent a 10-point letter to Saleh with demands for immediate reform.

The parliamentarians called for national dialogue between all parties within a week and restructuring of the army to make it more representative of Yemen’s society.

They also demanded that Saleh acknowledge “problems and mistakes” in the poverty-stricken formerly independent south of Yemen.

Residents of the region complain of discrimination by the Sanaa government and regularly stage rallies calling for secession.

On Thursday, a bomb exploded during such a protest march, killing one person and wounding two in the town of Lawdar.

In the port city of Aden, an unemployed 27-year-old man who had set himself on fire four days earlier, died of his injuries.

Abdullah Mohammed Qasem died after dunking himself in five litres of gasoline and setting himself ablaze due to “difficult” living conditions, his family told the AFP news agency. 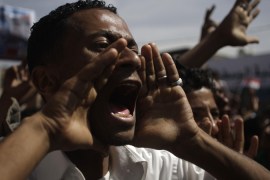 The pied piper of jihad

In Yemen, pressure from Western governments to uncover terrorists is harshening an already repressive regime. 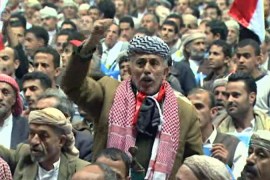 Seven parliamentarians quit ruling party to protest against what they say is government violence against demonstrators. 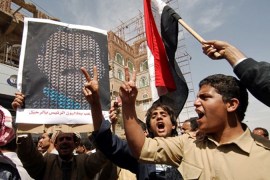 Protests turn deadly as the president’s supporters open fire on anti-government demonstrators in the capital, Sanaa. 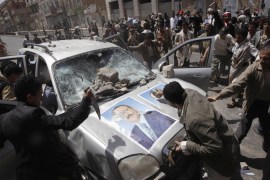 Protesters take to the streets of Sanaa for 12th day but Saleh insists he will step down after serving his term.