An influential politician in the Philippines has gone on trial for the alleged killing of 57 people in the worst political massacre in the country’s history.

The first witness took the stand on Wednesday after Jocelyn Reyes, the lower court judge, rejected a motion by lawyers for Andal Ampatuan Jr, the main defendant, to delay the start of the trial for 10 days.

Ampatuan was running to succeed his father as governor of the Maguindanao province last November when he and more than 100 armed men allegedly stopped a convoy that belonged a political rival and murdered the passengers, afterwards pushing their bodies into mass graves they had dug beforehand.

Manette Salaysay, a relative of one of the victims who attended the court session, hailed the start of the trial, which had been delayed for five months.

“It is difficult to fight these devils,” she told AFP news agency. “We want to see the light of justice.”

Ampatuan, wearing a yellow prison shirt and flanked by plainclothes police, sat impassively behind his lawyers as the first witness – a man named Lakmudin Saliao – was sworn in.

Saliao testified that Ampatuan’s father, Andal Ampatuan Sr., and brother, Zaldy Ampatuan, were present at a meeting on November 17 where they helped plan the massacre.

Though she welcomed the start of the trial, Evans said it does not address one of the root causes of the massacre – the Philipinnes tolerance for locally run, paramilitary forces.

Under national laws allowing the deputising of local militias to combat Muslim separatist fighters in the country, the Ampatuan’s have built up what amounts to a large private army.

“The government has not done anything to disable and disarm these paramilitary forces,” Evans said.

The trial, held at a special courtroom built inside a maximum-security police jail in southern Manila, is being held amid allegations of witness intimidation and fears the case could drag on for years.

There are 19 people who stand accused in the current trial, out of a total of 195 named in the overall prosecution, while 127 suspects remain at large.

It was to start last week but the judge moved it back seven days to give Ampatuan’s lawyers more time to comment on previous court rulings related to the case.

Rights groups and the victims’ relatives have accused Ampatuan of applying delaying tactics while ordering his men to terrorise witnesses.

Elaine Pearson, deputy Asia chief of HRW, said five people with knowledge of alleged abuses by Ampatuan and his supporters have been killed since the massacre.

HRW’s Evans said that witnesses in the trial remain at risk as long as hundreds of suspects remain uncaptured.

The five slain people included a key massacre witness who could have placed Ampatuan at the scene, she said.

Pearson said: “Abuses in Maguindanao have not stopped with the arrest of six members of the Ampatuan family.

“Prompt investigation of ongoing crimes is essential to prevent further killing and to stop suspects from interfering with the trial.”

At least 30 journalists were among those shot dead in the massacre in Maguindanao province in the single biggest attack on the working press in history, according to global press watchdogs.

Five other members of Ampatuan’s family, including Andal Ampatuan Sr, the patriarch, are among the 196 people facing charges related to the massacre, although more than 100 of the alleged armed men remain at large.

Ampatuan Jr, then a local mayor, allegedly led the massacre to stop the rival from running against him for the post of governor of Maguindanao province in this year’s national elections. 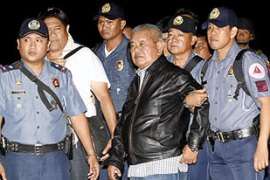 Participant in killing shot dead before able to give evidence at trial, prosecutor says. 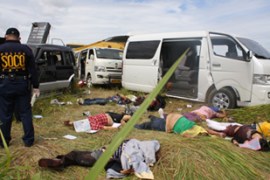 Gunman who took part in massacre tells Al Jazeera he was ordered to kill witness. 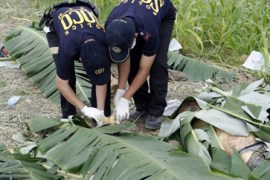 Philippines gunman speaks out on November’s bloody massacre in Maguindanao.