Curfew has been re-imposed in the northern Indian region of Kashmir, a day after clashes between protesters and police claimed the lives of at least 18 people.

The AFP news agency reported quoting Indian officials that 10 people were wounded in Tuesday’s police shooting in Srinagar and four other towns.

Saajid Haider, editor of the Kashmiri Observer, a local newspaper, told Al Jazeera that the curfew was both “suffocating” and “unprecedented in the recent past”.

“We have a round-the-clock curfew, where nobody is allowed out and there is a shoot-at-sight order […] there have been a defiance of curfew at a number of places and there is mounting anger against the oppressive policies of the state,” he said.

Monday’s protests against Indian rule and a Quran controversy were the most violent since mass demonstrations began in Kashmir valley three months ago.

Thousands of police have been stationed in the region to prevent further violence, while all flights to Srinagar have been suspended.

Despite the curfew, thousands of protesters took to the streets on Monday, throwing rocks, torching government buildings and chanting: “Go India, go back. We want freedom.”

The day’s toll included at least seven people killed in police clashes after Muslim protesters set fire to a Christian missionary school and government buildings in two districts to denounce reports on the Iranian state-run channel, Press TV, that copies of the Quran had been damaged in the US over the weekend.

One police officer was also killed in the mob violence.

Clashes over the summer have left 88 civilians dead in Kashmir, mostly killed by security forces.

AK Antony, the Indian defence minister, said the government was “pained” by the violence and admitted the situation was “very serious”.

He said that an all-party meeting would be held in New Delhi on Wednesday, and the government would afterwards take a decision on whether to partially lift a 20-year-old emergency law that is despised by many in Kashmir.

The Armed Forces Special Powers Act was introduced in Kashmir in 1990, giving Indian army and paramilitary troops sweeping powers to open fire, detain suspects and confiscate property, as well as protecting them from prosecution.

“Before we take a final decision, we will take into confidence all the major parties so that everybody is involved,” Antony said.

Commenting on the current Kashmir situation, Haider, the newspaper editor, told Al Jazeera: “There is no political initiative coming forward and people are, in desperation, taking to the streets and getting killed.

“The problem is that the majority of the parties are in denial mode […] the largest [Indian] opposition [party, the BJP, today is saying that the government is capitulating to the secessionsts in Kashmir.” 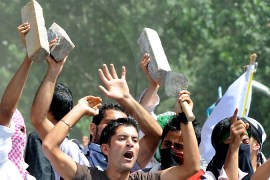 Many injured as separatists defy indefinite curfew imposed after day of violent protests against Indian rule. 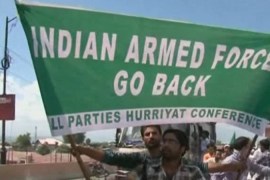 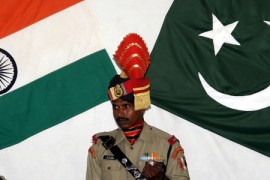 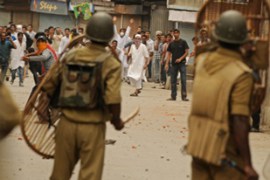