At least 20 people have been injured in clashes between Indian security forces and separatist protesters who defied an indefinite curfew imposed on Indian-administered Kashmir.

The government deployed thousands of security forces and imposed an indefinite curfew on Kashmir’s summer capital, Srinagar, on Sunday, a day after demonstrators set fire to public buildings in protest against Indian rule.

“Syed was inside at the time of attack, but escaped unhurt,” a senior police official said.

At least 15 people, including eight policemen, were injured in Sunday’s clashes between government forces and stone-throwing protesters in different parts of the state, police said.

The curfew was extended to other big towns in the valley in an attempt by the Indian government to respond to the biggest separatist demonstrations in two years in Kashmir, triggered by the killing of a 17-year-old student by police in June.

In Srinagar, troops equipped with assault rifles patrolled deserted streets in most districts and blocked off lanes with razor wire and iron barricades.

But clashes erupted in two residential districts of the city.

This year has been one of the most violent years in Indian-ruled Kashmir in recent times. More than 70 people have been killed so far in clashes between anti-India protesters and security forces.

Mirwaiz Umar Farooq, the main separatist leader, said he was dismayed by the lack of international concern about Kashmir.

“The UN cannot shy away from their reasonability in Kashmir. They have to talk to the leadership in India and Pakistan and tell them to stop these killings,” Farooq told Al Jazeera from Srinagar.

“More than 70 people have been killed by Indian forces and not a single Indian soldier or police man has been killed. When they fire on the protesters, they don’t fire to disperse. They fire to kill.”

But Omar Abdullah, the chief minister of Jammu and Kashmir, said that the assurances they were given, that the protests would be peaceful, were insincere.

Speaking to Al Jazeera from Srinagar, he said: “We allowed [the protesters] to march to the centre of Srinagar city and [Umar Farooq] assured us that the protest would be absolutely peaceful and that after staging a peaceful sit-in for half an hour, they would disperse from there … [that did not happen].”

Saturday’s clashes come at a time when the Indian government is discussing a proposal to water down the Armed Forces Special Powers Act. This gives Indian security forces the right to detain and interrogate anyone they think suspicious in so-called disturbed areas.

Killings of civilians have sparked anger across Kashmir, where sentiment against Indian rule runs deep. 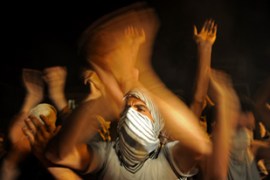 Indian government’s offer for talks turned down after weeks of violent protests. 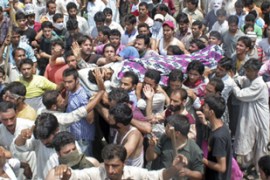 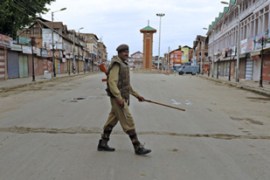 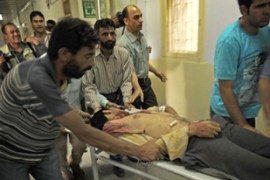