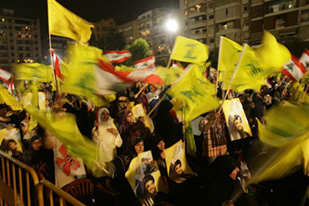 Tuesday’s border skirmish between the Lebanese and Israeli armies did not involve Hezbollah; indeed, Hassan Nasrallah, the group’s leader, said he ordered his fighters not to get involved.

But the clash will further raise tensions along Lebanon’s southern border, already running high after months of heated exchanges between Israel, Hezbollah and the Lebanese government.

Nasrallah has already threatened to retaliate against any future “Israeli aggression,” saying in a speech on Tuesday night that “the Israeli hand that targets the Lebanese army will be cut off.”

The month-long 2006 war between Israel and Hezbollah ended with United Nations resolution 1701, which demanded that both sides respect the border, and that “all armed groups in Lebanon” be disarmed. It also barred Hezbollah from operating south of the Litani River.

Both parties have routinely ignored those demands over the last four years.

Hezbollah continues to operate south of the Litani, in spite of the UN peacekeeping force in the region, and the group has expanded its stockpile of weapons.

Israeli military jets, meanwhile, routinely ignore the border and fly over Lebanese airspace. The Lebanese government also accuses Israel of spying in Beirut and meddling in the country’s internal affairs.

Those tensions have existed for years. But several more recent events have escalated fears of another conflict in southern Lebanon.

Shimon Peres, the Israeli president, said in April that Syria had transferred long-range Scud missiles to Hezbollah. The missiles have a range of more than 400 miles, giving them the reach to hit most of Israel’s major population centres.

Peres did not offer any evidence to support the claim, nor have other Israeli officials who have repeated it since.

Saad al-Hariri, the Lebanese prime minister, went on a diplomatic offensive shortly after Peres’ announcement, calling a number of world leaders to reassure them that Hezbollah did not have the missiles. General Jean Khawaji, the Lebanese army chief, said he was “convinced there are no Scuds in Lebanon”.

Sheikh Naim Qassem, the deputy leader of Hezbollah, refused to confirm or deny the reports in an April interview with Al-Sharq Al-Awsat. But he called the reports “an attempt to distract attention from the deteriorating US-Israeli relationship”.

Despite the denials from Lebanon, though, the Israeli government continues to warn that Hezbollah has Scud missiles pointed at Tel Aviv and Jerusalem.

Earlier this year, Hassan Nasrallah, the Hezbollah leader, delivered a bombastic speech in which he threatened to attack Tel Aviv if the Israeil army strikes Beirut.

The speech was essentially retaliatory: Nasrallah was threatening to strike back, not to strike first. He also said that Hezbollah does not want another war with Israel.

On the Israeli side, defence minister Ehud Barak said several times that the Israeli army would attack Lebanon if any rockets were fired into Israeli territory. “We will see it as legitimate to hit any target that belongs to the Lebanese state, not just to Hezbollah,” he said last month.

The UN peacekeeping force in southern Lebanon (Unifil) operates under a tight mandate that limits its ability to enforce UN resolution 1701.

When the force tried to expand its activities – carrying out a number of exercises earlier this summer – it was attacked several times by villagers. Hezbollah denied any role in the unrest, but Qassem told the Lebanese newspaper As-Safir that Unifil’s role in the south was “suspicious”.

Security analysts in Lebanon say the force is simply incapable of enforcing the resolution.

The Lebanese government, meanwhile – fearful of provoking sectarian conflict, and wary of Hezbollah’s well-equipped fighters – has shied away from trying to disarm the group. Michel Sleiman, the Lebanese president, said in May that Lebanon would not tell Hezbollah to disarm.

The Lebanese government filed a complaint at the United Nations last month that accused Israel of running a “spying ring” in the country.

More than 50 people have been arrested since April 2009, and at least five of them have received death sentences. One man was convicted of giving Israeli officials the names and addresses of Hezbollah fighters; another leaked a list of military targets during the 2006 war, according to the court.

And an army officer was arrested earlier this week for spying, according to the Lebanese newspaper Al-Akhbar.

Both Hezbollah and the Israeli government have repeatedly said they do not want another war. Hezbollah fears the political consequences of drawing Lebanon into what will likely be an even more ruinous conflict than the one in 2006.

Israel, meanwhile, fears an uncertain outcome – the 2006 war being widely viewed as a draw, since Hezbollah retained its weapons.

But tensions remain high along the border, and there are fears on both sides that even the slightest provocation could escalate.