The White House said on Thursday that Carl-Henric Svanberg, the chairman of BP, had been asked to meet Barack Obama, the US president, on Wednesday, while Eric Holder, the US attorney-general, pledged to make BP pay for “all the damages” from the spill.

Al Jazeera’s Tom Ackerman, reporting from Orange Beach in Alabama where the oil has hit, said politicians are feeling the pressure and they are responding.

“The attorney-general of Florida is now demanding that BP open up an account with three billion dollars in it to pay in advance for any expenses incurred by the state,” he said.

“How much that pressure will actually reverberate and be felt by BP and how they will respond has yet to be seen.”

Estimates of the oil flow have steadily climbed from the 5,000 barrels per day (bpd) level initially cited by BP and US officials, although BP had said the estimates were unreliable.

The wide variation in the figures points to the difficulty in estimating flow of a well that is 1.6km beneath the surface and reachable only by remotely operated robots, and McNutt admitted the estimate was “still a work in progress”.

Still, even at the minimum estimated rate of 20,000bpd, the well has dumped at least a million barrels of oil into the Gulf of Mexico since the Deepwater Horizon rig exploded on April 20 and sank two days later.

That is more than four times the amount of oil the Exxon Valdez spilled in Alaska in 1989, the previous worst spill in US history.

The US congress voted to make more money from a trust fund available to the Coast Guard to pay for its response to the spill on Thursday, removing a $100m limit that would have meant the Coast Guard running out of money by next week.

The trust fund, which has about $1.6bn, is financed by a tax of eight cents per barrel on oil produced by or imported into the US. The House of Representatives passed a bill last month to increase the tax to 34 cents a barrel while the senate is considering an increase to 41 cents.

The bill now goes to Obama to be signed into law but his homeland security secretary, Janet Napolitano, said that “while these funds will allow us to continue mounting an all-hands-on-deck, relentless response, our commitment to holding BP accountable for all costs associated with this disaster … has not wavered”.

Fears over the mounting clean-up costs and the US push for BP to fully compensate economic victims of the spill has taken a toll on BP shares, which have lost nearly half their value since the explosion and sinking of the Deepwater Horizon rig in April.

But its shares recouped some of the previous day’s steep losses on Thursday, rising $3.58, or 12.3 per cent, to close at $32.78 on Wall Street, after earlier closing down six per cent in London.

Spurred by Wednesday’s nearly 16 per cent stock plunge, BP officials reiterated early on Thursday that the company has enough cash to cover the costs of the spill’s aftermath.

Analysts agree, saying that BP will have around $5bn this year to pay damages and clean-up costs once dividends and capital expenditures are covered. 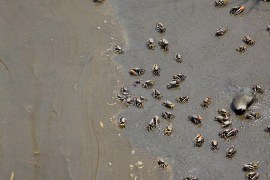 Louisiana’s state bird is among the many sea creatures affected by the BP oil spill. 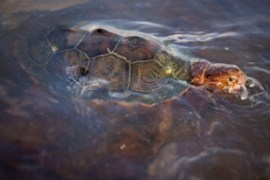 Under pressure, US government threatens to impose more penalties over giant spill. 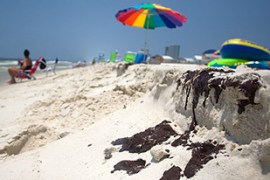 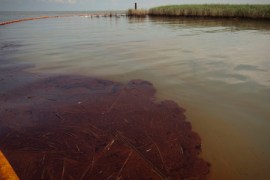 It has been 50 days since the rig exploded and BP is still struggling to plug the leak.