Binyamin Netanyahu, the Israeli prime minister, gave his “full backing” to the military forces after the raid, which he said “was to prevent the infiltration of thousands of rockets, missiles and other arms that could hit our cities, communities or people”.

“I give my complete backing to the army, the soldiers and commanders who acted to defend the state and to protect their lives.” He also said Israel regretted the loss of life in the raid.

Israeli media reported that many of the dead were Turkish nationals.

Hamas, the Palestinian group which governs the Gaza Strip, said the assault was a “massacre” and called on the international community to intervene.

The Hamas leader in Gaza, Ismail Haniya, urged Arabs and Muslims to show their anger by staging protests outside Israeli embassies across the globe.

The call came even as demonstrationsdenouncing the Israeli raid were being held in many cities around the world, including the capitals of Syria, Jordan and Lebanon.

Thousands of Turkish protesters tried to storm the Israeli consulate in Istanbul soon after the news of the operation broke.

The United Nations Security Council  met on Monday afternoon for an emergency session to discuss the matter.

Oscar Fernandez-Taranco, the chief foreign policy official of the UN, called on Israel to end its “counterproductive” and “unacceptable” blockade of Gaza.

Al Jazeera’s Jamal Elshayyal, on board the flotilla’s lead ship, the Mavi Marmara, said in his last report before communications were cut off, that Israeli troops used live ammunition during the assault.

The Israeli military, 10 of whose soldiers were reportedly wounded in the operation, said troops opened fire after “demonstrators on board attacked the IDF naval personnel with live fire and light weaponry including knives and clubs”.

Our correspondent said that a white surrender flag was raised from the ship and there was no live fire coming from the passengers.

Al Jazeera’s Sherine Tadros, reporting from the Israeli port of Ashdod, where the aid ships were taken after the assault, said the Israeli army was not giving any details of who had been killed, injured or detained.

“As soon as [the ships] land here, the goods [will be] taken [and] put into a terminal, and the passengers [made to] undergo extensive security checks,” she said.

More than 80 activists had been detained by mid-evening, Sabine Hadad, the spokeswoman for Israel’s immigration police, told AFP.

“So far, 83 have been detained, of whom 25 have agreed to be deported. The rest are going to jail,” she said.

Hadad said the Israeli authorities were expecting “hundreds more” arrests through the night.

Defending Monday’s military raid, Mark Regev, the Israeli government spokesperson, said the Israeli commandos came under fire from people on board the flotilla whom he branded as “violent extremists”.

“Israel was totally within its rights under international law to intercept the ship and to take it to the port of Ashdod,” he told Al Jazeera.

“Unfortunately they were met by the activists on the boats with deadly violence, knives, metal clubs, even live fire on our service people. They initiated the violence.”

He said the people on board the flotilla were not peaceful activists.

“They are part of the IHH, which is a radical Turkish Islamist organisation which has been investigated by Western governments and by the Turkish government itself in the past for their links with terrorist organisations.”

But Recep Tayyip Erdogan, Turkey’s prime minister, said the flotilla was carefully inspected before departure that there was no one on board “other than civilian volunteers.

“I want to say to the world, to the heads of state and the governments, that these boats that left from Turkey and other countries were checked in a strict way under the framework of the rules of international navigation and were only loaded with humanitarian aid,” he said.

Murat Mercan, the head of Turkey’s foreign relations committee, said that claiming activists on board had links to terrorist organisations was Israel’s way of covering up its mistake.

“Any allegation that the members of this ship is attached to al-Qaeda is a big lie because there are Israeli civilians, Israeli authorities, Israeli parliamentarians on board the ship,” he told Al Jazeera.

“Does he [Regev] think that those are also attached to al-Qaeda?”

The flotilla, aiming to break the Israeli siege of Gaza, was attacked in international waters, 65km off the Palestinian coastal enclave.

Avital Leibovich, an Israeli military spokeswoman, confirmed that the attack took place in international waters, saying: “This happened in waters outside of Israeli territory, but we have the right to defend ourselves.”

Mark Taylor, an international legal expert, told Al Jazeera that every state, including Israel, has the right to self-defence.

“In situations in which the state feels that it needs to take an act in international waters to defend itself, it will do that,” he said.

“But that doesn’t necessarily mean that it’s legal under international law.

“In this case, we’re looking at a humanitarian aid convoy, with prominent people and activists, clearly not a military target in any way whatsoever.”

Israel said the flotilla boats – carrying 10,000 tonnes of humanitarian aid – were embarking on “an act of provocation” against the Israeli military rather than providing aid, and issued warrants to prohibit their entrance to Gaza.

But Adnan Abu-Hasana, a spokesman for UNRWA, said the Gazans are in dire need of aid after Israel’s war on the territory in December 2008-January 2009 destroyed buildings and infrastructure.

“We need hundreds of thousands of tonnes [of aid] to rebuild Gaza,” he told Al Jazeera.

“We need more of building materials … We need spare parts for machines in the agricultural and industrial sectors, for the fishermen, all these sectors are nearly collapsed.

“Eighty per cent of the Gazans are dependent on humanitarian aid coming from UN organisations such as UNRWA.” 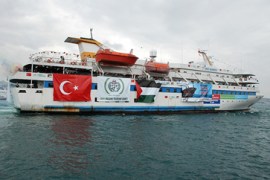 Ships aiming to reach Gaza remain off Cyprus as Israel threatens force to stop them. 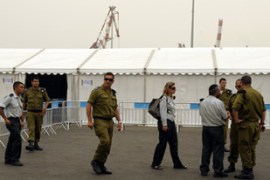