Bishop Hero Blair, the country’s official ombudsman, said independent evaluations put the number of civilian dead at 44 in West Kingston alone, and the death toll is likely to rise.

Al Jazeera’s Sebastian Walker said the fighting had left many residents trapped in their houses.

“[Authorities] are trying to get food and supplies into most places, where residents have been pretty much holed up in their houses since the fighting started on Sunday.”

He said that there was no sign of Coke, who is wanted by the US.

“There are concerns the man who is wanted by authorities has actually [left] that area. There is a lot of confusion as to where he is right now and about the focus of police operations.”

Elon Parkinson, a presenter on Jamaica’s 90 FM radio station, told Al Jazeera that the violence may make it harder to capture the kingpin.

“Coke’s [supporters] indicated to us … that any deal between the US and Jamaican authorities would be almost impossible, especially with the way the onslaught is taking place,” he said.

Tensions in Jamaica rose over the last week after Bruce Golding, the Jamaican prime minister, reversed his long-standing refusal to extradite Coke to the US.

Golding had previously stalled the case for nine months claiming the US indictment relied on illegal wiretap evidence, but he changed his stance amid a growing public outcry over his stand.

US prosecutors describe Coke as the leader of the “Shower Posse” that murdered hundreds of people during the cocaine wars of the 1980s.

Relations between Jamaica and the US grew strained when Jamaica ignored an earlier extradition request for Coke, who is a supporter of the ruling Jamaica Labour Party and wields influence in the inner city constituency that Golding represents.

The US state department said on Monday it was “the responsibility of the Jamaican government to locate and arrest Mr Coke”.

The drug trade is deeply entrenched in Jamaica. The island is the largest producer of marijuana in the Caribbean region. Gangs tied to the trade have become powerful organised-crime networks involved in international gun smuggling.

The drug trade has also fuelled one of the world’s highest murder rates, with Jamaica experiencing about 1,660 homicides last year among a population of just 2.8 million people. 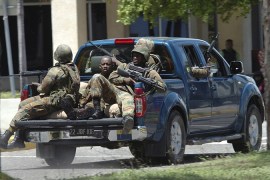 Island of music and murder

People & Power looks at the controversial handling of gang violence in Jamaica.