The announcement came after the parliament was forced to suspend proceedings when the anti-government protesters briefly stormed the building, forcing MPs to flee from their seats.

Some senior officials were evacuated by military helicopter as hundreds of protesters pushed past security forces at around midday on Wednesday, using a lorry to ram the gates to the parliament compound.

Other MPs rushed to climb walls at the back of the compound in an effort to escape.

A state of emergency allows authorities to suspend certain civil liberties and ban all public gatherings of more than five people.

It is the fourth time since 2008 that emergency law has been declared in the capital because of political turmoil.

Al Jazeera’s Wayne Hay, reporting from Bangkok, said the protesters showed no sign of interrupting their rallies after the state of emergency was declared.

“The rhetoric of the red shirt leaders on the stage has certainly intensified and a lot more red shirts supporters have flowed into the protest sites.”

Red shirt leaders vowed late on Tuesday to itensify the protests, which started in the capital on March 12, to force the government to stand down and call fresh elections.

“We will take it to the next level,” Nattawut Saikua, a leader of the protest movement known formally as the United Front for Democracy Against Dictatorship, told the crowds.

“We can’t say what we will do … we won’t give the government chance to prepare.”

On Tuesday, amid sporadic clashes between red shirts and security forces, a grenade attack injured two policemen outside the central Bangkok headquarters of Abhisit’s Democrat party.

The prime minister has been under pressure from Bangkok’s elites, the middle-class and even his own government to use force to remove the protesters and restore order in the city.

The government on Tuesday obtained a court order to arrest protest leaders, but said they could only be detained during an act of speaking to crowds.

The red shirts see Abhisit, an Oxford-trained economist, as a stooge controlled by the unelected elite establishment and military.

They say the prime minister – who came to power in a 2008 parliamentary vote after the courts dissolved a pro-Thaksin party in government at the time – should call an election and let the people choose their government.

The anti-government protesters have vowed to honour any outcome of a fresh election.

In the last five weeks, foreign investors have pumped more than $1.6bn into Thailand’s stock market, which is up more than 80 per cent over the past year.

But there is concern the political crisis could squeeze longer-term foreign direct investment (FDI) which has been volatile since the crisis began with a 2006 military coup that ousted the twice-elected Thaksin, following allegations of corruption.

Roberto Herrera-Lim, an analyst at the Eurasia Group consultancy, said that for the first time since the coup, foreign investors are “really taking a hard look at Thailand long-term because of this”.

“They see that the conflict is much deeper than the elite conflict of the past.” 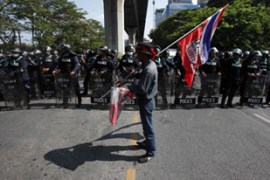 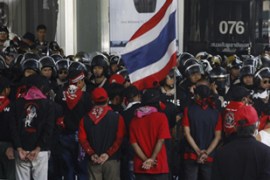 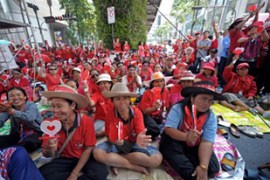 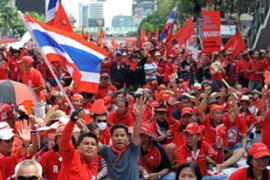