Around 160,000 litres of oil, meanwhile, have poured into the sea from the well, creating a massive oil slick that could cause an environmental disaster along the US Gulf coast, threatening wildlife as well as economically important fishing grounds and oyster beds.

“If we don’t secure this well, yes, this could be one of the most significant oil spills in US history,” Landry said.

The oil slick is now only 32km away from the Louisiana coastline, with experts predicting it could reach the small town of Venice by Friday.

British energy company BP, which had contracted the sunken oil rig, said it plans to drill a relief well as part of a $100m effort to take pressure off the source of the leak.

Drilling is due to begin on Thursday, although BP says it could take up to three months to complete.

But if crews controlling the robotic submersibles fail to activate a shutoff device, called a “blowout preventer”, at the head of the well before then, up to 16 million litres of oil could empty into the Gulf of Mexico.

Michael Gravitz, an oceans advocate at Environment America, told Al Jazeera: “We are hoping, as most people are, that the coast guard and the companies will be able to suck up most of the oil. But even under the best of circumstances, they only get about 40 per cent of the oil.

“Taking a step back from this, the real solution to this is a global climate change and energy bill which would reduce the need for drilling in places such as the Gulf of Mexico.”

As an emergency back-up, BP engineers are also working to construct a giant dome to place over the leaking well to contain it. Collected oil could then be pumped out of the structure.

Prentice Danner, a spokesman for the US coast guard, said that option will take between two to four weeks, and is so far an untested one.

Exact dimensions of the dome were still being worked out, but officials said it would be similar to a cofferdam – a welded steel containment structures currently used in oil rig construction.

The US departments of interior and homeland security have said they will launch a joint investigation into the oil-right explosion.

The inquiry will have subpoena power as well as the ability to call witnesses and hold public hearings.

Transocean Ltd, the rig owner, has said the explosion appeared to be a blowout, in which natural gas or oil forces its way up a well pipe and smashes the equipment.

The oil spill has the potential to be the worst of its kind in the US since the 1989 Exxon Valdez tanker disaster, although it is not anywhere near the same scale yet.

That spill, considered one of the worst-ever manmade disasters, poured around 41 million litres of crude into Alaska’s Prince William Sound, devastating hundreds of kilometres of once pristine coastline. 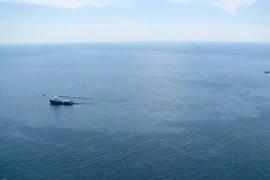 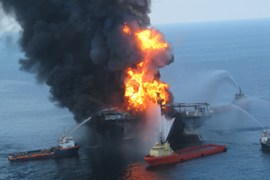 Up to 1,000 barrels of oil per day said to be leaking from ruptured Gulf of Mexico well. 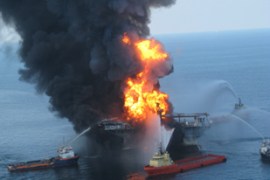