“She was born in 1992 and lived in the Khasavyurtsky region of Dagestan,” the official said.

“The material has been sent to the investigative committee of Russian prosecutors.”

Neave Barker, Al Jazeera’s correspondent in Moscow, said: “Police said that they had identified an apartment building that had been rented out by two suspected accomplices of the female suicide bombers.

“They say these two men may have accompanied the women to a metro station in the southwest of the city where they handed them the bomb belts.

“The men are then believed to have gone back to the apartment building, as the female suicide bombers went on to their final destination.

“It was the men in the apartment building, at a distance, that then detonated the explosives by remote [control].

“The investigators say they found traces of explosives, some traces of preparation, within the apartment building.

“These men are known to them and they have been put on a wanted list.”

Abdullayeva had been married to Umalat Magomedov, a high-ranking Dagestani anti-government fighter, who was killed by Russian security forces last year.

Russian media has described Abdullayeva as a “Black Widow”, the name given to suicide bombers whose partners have been killed by Russian forces in areas such as Chechnya, Dagestan and Ingushetia.

Photographs published on Friday showed Abdullayeva posing in an Islamic headscarf and holding a gun, sitting next to Magomedov.

Magomedov was killed in an operation on December 31 and was suspected of being close to Doku Umarov, the separatist leader who has claimed responsibility for the Moscow attacks.

The Russian newspaper Kommersant said that Abdullayeva was from the village of Kostek in western Dagestan and that she had met Magomedov when she was 16 after making contact through the internet.

Reports said she had been identified as the bomber after officials compared the photograph with the severed head found at the Park Kultury metro station.

Monday’s twin explosions – first at the Lubyanka metro station and the second at the Park Kultury station in the southwest of the city – have been blamed by the authorities on fighters from the North Caucasus.

Dmitry Medvedev, the Russian president, has vowed to hunt down and annihilate those behind the attacks.

Russian president says he will avenge recent attacks during visit to the North Caucasus. 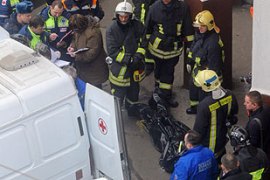 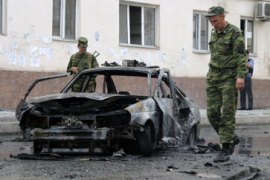 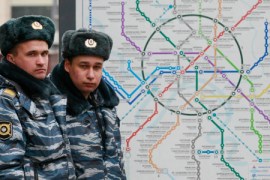 Behind the Moscow bombings

Inside Story looks at the deadly blasts in Russia’s capital and the issues behind it.