Monday’s announcement comes nearly two weeks after the army ousted Tandja after a lengthy dispute in the west African country over his moves to extend his mandate and powers.

The coup leaders, who call themselves the Supreme Council for the Restoration of Democracy (CSRD), have pledged to return the country to civilian rule as soon as possible.

Djibo had said on Sunday that “to ensure a serene and impartial transition, we pledge that no member of the supreme council or of the transition government will be a candidate in the coming presidential elections”, for which no date has been set.

“The days of autocratic regimes in this country are over,” he had said, adding that the CSRD’s “only goal is to accompany the return to democracy in our dear homeland”.

The leaders of the coup told representatives of the African Union and the regional economic bloc Ecowas last month that they had no intention of holding on to power.

The African Union and Ecowas, along with the United Nations, European Union and former colonial power France, all condemned the overthrow of Tandja.

But privately, many diplomats believe the coup has created an opportunity to solve the political crisis that began when Tandja changed the constitution last year to broaden and entrench his powers.

Tandja’s removal also appears to have been met positively inside Niger, a country rich with uranium resources but ranked last in the UN Human Development Index.

Thousands of people turned out on the streets to back the military after the February 18 coup and a coalition of opposition parties, trade unions and human rights groups called on people to show their support for the soldiers. 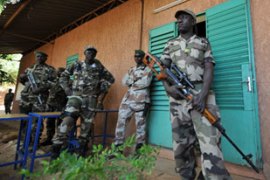 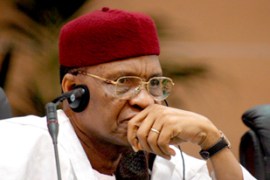 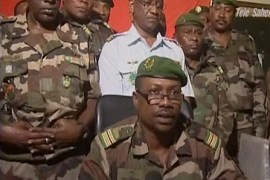 Military commanders who led the coup against President Mamadou Tandja.

Calm after coup in Niger