Nigerian police and military units carried out extra-judicial killings last year in the aftermath of clashes with members of a Muslim group in the north of the country, footage obtained by Al Jazeera appears to confirm.

An estimated 1,000 people were killed as Nigerian government forces fought Boko Haram in Borno, Yobe, Kano and Bauchi states in July and August of 2009.

But the footage obtained by Al Jazeera shows that many of the deaths occurred only after the fighting was over.

Elements of the security forces staged a follow-up operation in which house-to-house searches were conducted and individuals were apparently selected at random and taken to a police station.

‘Shoot him in the chest’

In the video, a number of unarmed men are seen being made to lie down in the road outside a building before they are shot.

As one man is brought out to face death, one of the officers can be heard urging his colleague to “shoot him in the chest not the head – I want his hat”.

As the executions continue another man is told: “Sit properly we want to take your picture.”

The shootings continue as a crowd gathers further up the street in front of the police station.

Voices can be heard saying: “No mercy, no mercy.”

Two officers seen in the video can be clearly identified by the name tags on their chests.

The family of Baba Fugu Mohammed, a respected community leader, told Al Jazeera that he was among those put to death outside the police station.

Fugu Mohammed was the father-in-law of Mohammed Yusuf, the Boko Haram leader whose group had battled the police, but the two had become estranged.

His family said that he had come to help police restore order, but was shot.

‘Killings of the innocent’

In the days following the clashes between the police and Boko Haram, the government, police and military repeatedly denied that civilians had been killed by their personnel.

But Nigerian officials have since acknowledged that extra-judicial killings took place and an inquiry was set up to investigate the incident.

“It was obvious [from] what we have seen and from the eye witnesses that the government police were doing the killings of the innocent,” Abubakar Umar Garda, a senator and a member of Nigeria’s ruling People’s Democratic party, told Al Jazeera.

“The government is investigating the incident and as we go along the perpetrators will be put in front of the law and the law will take its course … the government acknowledged that this was a crime against humanity … you cannot shoot an unarmed civilian.”

Fugu Mohammed’s family have given their story to the government commission set up to investigate the events that took place, but they are still waiting to receive an official explanation for the deaths.

Senator Umar Garda could not confirm to Al Jazeera whether there had been any arrests relating to the killings and there have been few tangible signs of the inquiry bringing anyone to account.

“Our research shows that the Nigerian police are getting away with murder, they killed hundreds of people a year without any investigation – any investigation on whether the use of force was lawful or not,” she said.

“What we saw on the footage happened seven month ago and we haven’t heard anything from the government whether they have arrested anyone and how far the investigation is going.”

Among those killed in the aftermath of the clashes between Boko Haram and the police, was Boko Haram leader Mohammed Yusuf.

In the Al Jazeera footage, he is seen wearing handcuffs and surrounded by heavily armed police officers.

Nigerian police have said that Yusuf was killed while attempting to escape, but he died still wearing the handcuffs.

In another video, which was made available shortly after last year’s fighting, Yusuf is shown inside the police station, his body covered with marks and bruises, as he is questioned about the organisation that he led.

It is not known whether the injuries were caused during the fighting, arrest, or detention.

Boko Haram, which means “Western education is prohibited” in the local Hausa dialect, has called for the nationwide enforcement of a strict interpretation of Islamic law, or sharia, even among non-Muslims.

Nigeria’s 150 million people are nearly evenly divided between Christians, who dominate the south, and the primarily northern-based Muslims. 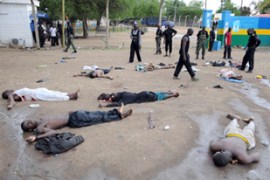 Hundreds of Darul Islam members detained as leader denies they are against education. 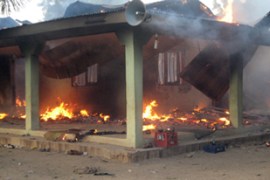 Nigeria to hold inquiry into unrest

Announcement of official hearing comes after days of deadly unrest in country’s north. 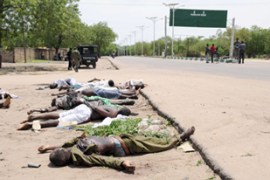