Flooded communities across eastern Australia could be underwater for more than a week, with the clean-up bill expected to hit billions of dollars.

Days of torrential downpours have left parts of central and southern Queensland state inundated, flooding thousands of homes and businesses, cutting off roads and forcing one town’s entire population to evacuate.

The flooding is some of the worst in the state’s history. Anna Bligh, the premier of Queensland, called the situation a tragedy.

“Some families at this very special time of year at Christmas have lost everything, this is a tragedy across towns and cities right throughout the state,” she said on Thursday.

The rain was easing on Thursday, but river levels continued to rise in many locations as high waters made their way toward the sea. Communities already swamped could remain underwater for up to 10 days, Bligh warned.

“The recovery … is going to require literally billions of dollars from federal, state and local governments [and] insurance companies,” she told Australian radio. “It’s an enormous disaster.”

Bundaberg, famous for its rum, was split into two as rising flood waters inundated 120 homes on Wednesday, forcing the evacuation of about 400 people overnight, Tony Ricciardi, the town’s deputy mayor, said.

Residents had to spend the night in makeshift shelters.

“Quite literally most of us, the clothes we are in, that’s it. That’s all we have got,” one man told local television.

Two people had to be rescued from their roof after water flooded their Bundaberg home, police said.

In the town of Theodore, the military evacuated the town’s entire population of 300 by helicopter on Wednesday. It is the first time in the state’s history that a town has been fully evacuated.

Only a few police officers remained in Theodore on Thursday.

The head of the state’s emergency agency, Bruce Grady, said the crisis would not pass quickly.

“These floodwaters are likely to remain high for a long period of time, in some cases that might be measured by weeks, rather than days,” he said on Thursday. “These waters will go down when nature tells us they will go down.”

“We won’t know until floodwaters recede the total amount of damage done,” Gillard said. “But what this does mean is the Queensland and federal governments will work together in those areas in partnership with the rebuilding of critical infrastructure.”

Flooding has shut down about 300 roads across Queensland, including two major highways to the state capital Brisbane. 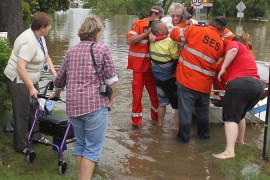 Hundreds of Australians are being evacuated by military helicopters as Queensland sees worst flooding in 50 years. 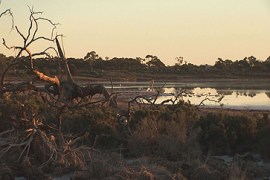 Drought is devastating the country’s largest river system and threatening its food supply.

Despite raging fires and drought, Australia appears to be shunning action on emissions.