The ruling Socialist party of Greece has won local government elections, despite a record-low voter turnout and increasing pressure on the country to impose a new round of spending cuts.

With 99.6 per cent of votes counted across the country, the Socialists won mayoral races in Athens and Greece’s second largest city, Thessaloniki, for the first time in 24 years.

Its candidates won eight of 13 races for regional governor, including greater Athens – giving George Papandreou, the prime minister, a political boost amid recession and rising unemployment.

Most races were decided in Sunday’s runoffs, after a first round of voting on November 7.

Results came in just hours before the European Union was expected to announce an upward revision in Greek deficit figures, pushing back months of fiscal progress.

And officials from the EU and International Monetary Fund (IMF) were due in Athens to inspect Greece’s implementation of the $150 billion loan agreement that rescued Greece from bankruptcy.

According to Papandreou, voters had turned their back “on cries of destabilisation” from opposition parties, who all campaigned against the EU-IMF deal.

“Today the citizens have shown the way forward as we proceed on our course,” he said.

Papandreou promised his 13-month-old government would serve out its four-year term, after dropping a threat last week to call an early general election unless the public backed his reforms.

“We have been given … precious time to change in the next three years what hasn’t been done in decades,” he said.

On Sunday, voter turnout hit record lows with just 34 per cent in Athens and 47 per cent nationally – figures that opposition parties argued revealed popular discontent with the government.

“Voters have called on the government to change course, away from policies that have suffocated the economy and plunged society into despair,” said Antonis Samaras, an opposition leader.

Socialist-dominated labour unions were also unimpressed by the government’s win, with officials saying they would go ahead with plans to hold a general strike next month.

“The reforms so far have been unfair and one-sided, even cutting pay for low-income pensioners,” said Yiannis Panagopoulos, leader of the GSEE – the country\s largest union.

“No one is staying up to see which party came out stronger … They just want to know whether these injustices will continue, or if something will change.” 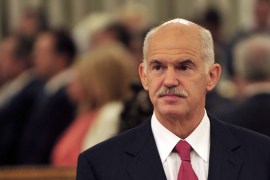 Greece’s prime minister drops his threat to call for early elections, saying Greeks voted in support of his efforts. 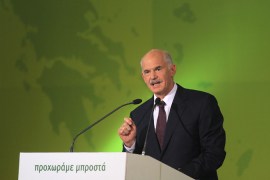