Ireland saw rapid growth in the past 15 years, but is now struggling with huge debt.

The country says it has funding until June next year, but analysts say it could need a bailout of up to $110 billion.

Even the possibililty that Ireland might default is a mighty comedown for the former Celtic Tiger, so-called for its rapid growth.

This was a country where most enjoyed the boom – but now the tiger is dead – and everyone is going to share the pain.

Al Jazeera’s Alan Fisher has more from the capital Dublin. 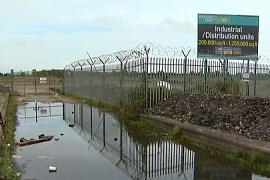